We Don’t Need No Photoshop

Recently I’ve mastered some simple tricks in Photoshop. Hoever I’ve visited the Louis Vuiton Museum in the Bois du Boulogne on a day and moment the wheather was purrrfect for photographers. Took many shots and didn’t need any (or hardly any) editing. Hence the Pink Floyd reference….. 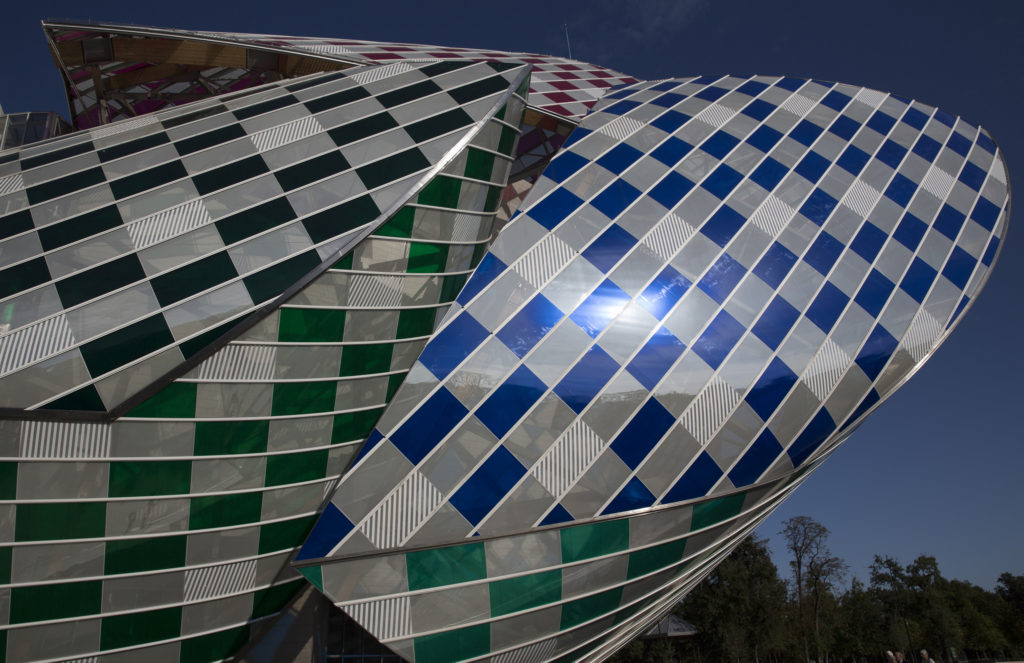 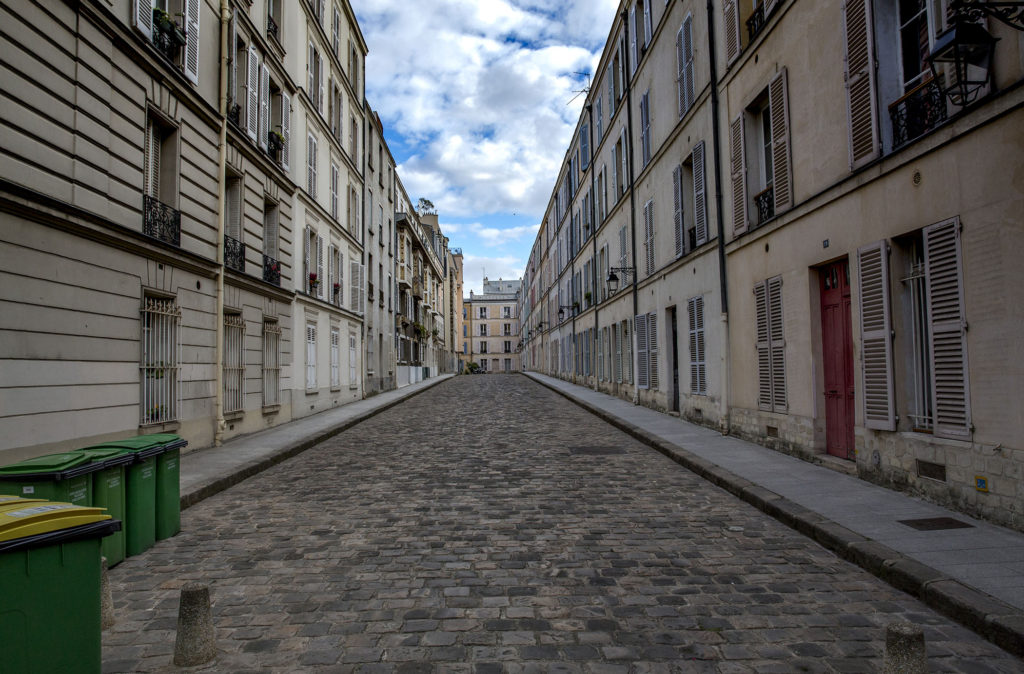 Last weekend I was in Paris. Where do you find an empty street like this? In Paris.

I took this photo from the Boulevard Raspail. The “street” is more like a mew. Its name is Passage D’Enfer. In the back it takes a turn to the left to another street.

A friend who was standing next to me said this scene could easily be a Hopper. Hence the “Hopper esque” of the title.

Note there is an iron gate locking the street from the Boulevard.

I simply stuck my lens between the bars of the gate 😉

At Retromobile in Paris there are many historic cars on show to be auctioned during the show by Bonhams.
Lot no. 141 the Panhard Levassor X73 Cabriolet was undiscovered, because it had been several decades in storage. It is amazing to see a car with such patina. The storage coverage dust stil in tact.

Panhard et Levassorâ€™s Type X73 first appeared in 1934. Designated â€˜CS Specialâ€™, it superseded the 2Â½-litre 6CS model. The Type X73 was powered by a six-cylinder sleeve valve engine with a capacity of 2,861cc, which was rated at 16CV for taxation purposes. Its larger engine made the X73 a better performer than its predecessor, the top speed going up from 125 to 135km/h (84mph). After September 1934, the range was updated with more modern styling and the X73 continued in production until June 1938.

Panhard et Levassor offered a â€˜Velunâ€™ convertible on the X73 chassis. Exclusive even by Panhardâ€™s standards, it was built in limited numbers: only one was sold in 1934, 31 in 1935, 25 in 1936 and six more in 1937. But the â€˜Velunâ€™ coachwork, built by Jansen, was different from that of the car offered here, so it seems reasonable to assume that this particular carâ€™s is the work of another coachbuilder.

Close inspection of this carâ€™s coachwork leads us to believe that it was produced by Meulemeester FrÃ¨res, whose office was located at lâ€™Ile Robinson, in Clichy-sur-Seine and the workshop at 7 rue TraversiÃ¨re. This coachbuilder exhibited for the first time at the 1927 Le Salon de lâ€™Automobile and in 1933 offered an aerodynamic convertible on a Peugeot 301 chassis, very similar in appearance to our Panhard convertible. It is expected that further information will be available at time of sale.
Preserved in remarkably original condition, having been stored for several decades on chassis stands, this Panhard et Levassor X73 convertible evokes the typically intense feelings of nostalgia associated with such â€˜barn findâ€™ vehicles. The car affords four-seat accommodation under its folding soft-top, while the two doors are hinged at the rear as was customary at that time. In short: it represents a unique and elegant variation on a reliable and sporting chassis from that most celebrated pre-war marque, Panhard et Levassor. Deserving a high quality restoration, this rare car would make a worthy addition to any collection dedicated both to technology and aesthetics.

Lot Notice
The coachbuilder is Gangloff not Meulemeester

BTW this is the third way of presentimng a slide slow…just copy and paste the embed code from Flickr..What do you think? 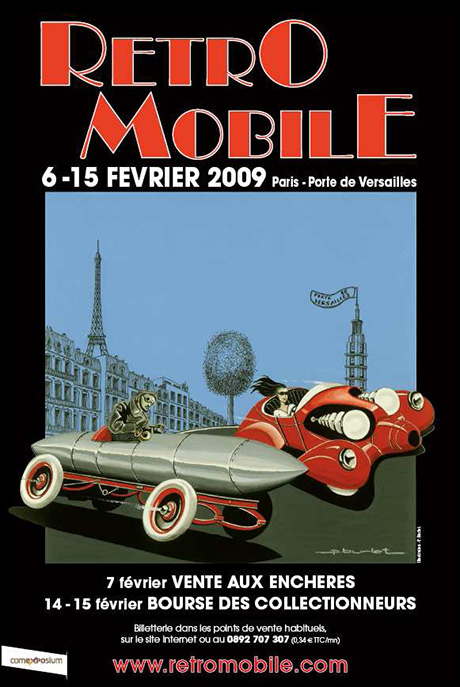 I spent a couple of days in Paris for the first time in 36 years. Last time I visited it was in February 1973, on our honeymoon. I visited it also in 1969 a year after the 1968 student revolts. For various reasons we decided to skip it ever since. In the meantime I had visited it on various business occasion, but when on business you actually don’t look at a city as you do when you spent some holidays. My conclusion now is that back in the late 60ies ans early seventies we didn’t have enough money to spent and stayed in the wrong districts. Especially the Montmartre district looks a bit seedy to stay in as it was seedy already in those days. But now we have decided that we will be back.

This time we stayed in the vicinity of the Eiffel Tower (XVI), but more about that in later posts.

Therefor I would like to tell a bit about my visit of the 34th Retromobile. According to the Historic car aficionados (several of my friends) it is a must see. One of the biggest shows in its sort in Europe.

The 2009 theme is very much on topic: New forms of Energy that are already more than one hundred years old:

The twenty or so vehicles on exhibition, some which will be able to be driven all have one thing in common: they are the forerunners of clean energy vehicles of today! 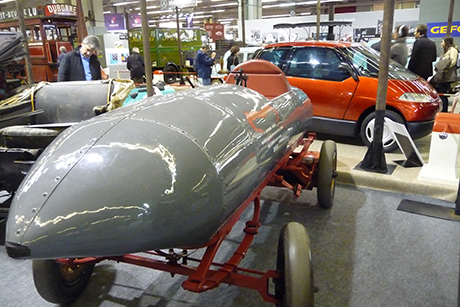 Among the photos I made is the Jaimais Contente (never content):

The â€Jamais Contenteâ€ was created by the engineer Camille Jenatzy and was an electric car which was in the shape of a torpedo on wheels. The bodywork was carried out by the coachbuilder Rothschild and was made of partinium, an alloy of laminated aluminum, tungsten and magnesium. 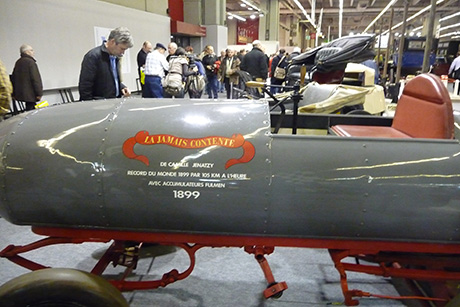 It was the first French car to break the barrier of 100km/h, on 1 May 1899 in AchÃ¨res (the Yvelines region, near Paris). Its characteristics were impressive: it had two electric engines which were placed at the back of the car behind its wheels, (Postel-Vinay ones), its maximum horsepower was 50kW (that is to say 67 hp), its power was provided by Fulmen batteries (80 pieces constitutingy nearly half of the vehicleâ€™s total weight!). The “Jamais Contente” which is exhibited at RÃ©tromobile is a replica which was made in 1992 and belongs to the Lions Club.

Planning a trip to Paris? Don’t plan without reading this Times Online article The Complete Guide to Paris Style Hotels, where Steve Keenan summarizes in a well written and well documented article some of the best hotels in Paris.

I had featured some on the list already. But there are new surprises.

I have avoided Paris for over 35 years after spending my honeymoon there. Maybe, Maybe I’ll reconsider:-)