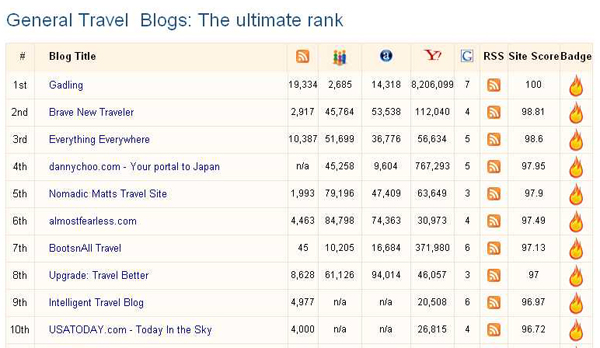 Those who follow this blog, know that I have spent quite some time with manually putting together top lists of travel bloggers according to Technorati in the past. The last one I published over a year ago on my TList page and for prior lists you can check out in my Tlist Category:

I did pray that someone would come up with a better measurement to replace my dumb work. Moreover at the time Technorati seemed too outdated and too infested with scrapers and sploggers and what all.

In June I discovered Frothy‘s Alexa only ranking.

Then came Invesp. I mentioned it already back in July, that put several measurement methods in a basket and created its own list of Top Travel Blogs.

From time to time I checked those and had a good reason not to go further with my own cumbersome list making.

But now Technorati has really cleaned its act and rolled out a completely new approach in their Blog ranking. I have a feeling that they are moving in the same direction as Google search is moving. A nice way of reinventing yourself Technorati!

Each ranking has its own pros and contras, but if you want to quickly orientate yourself about influential travelblogs you can have a look at both lists and make your pick, while I can concentrate on other content here:-)