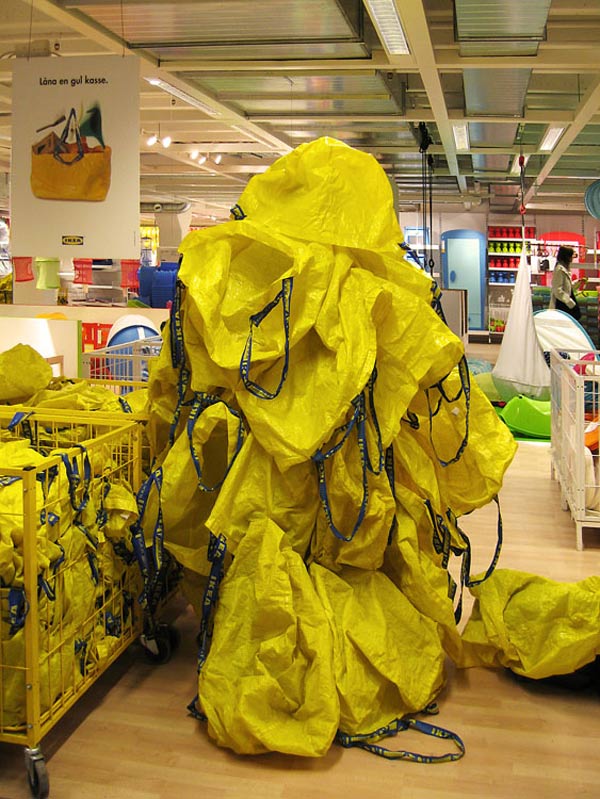 On a bit lighter note than volcanic ash I like to share the Urban Camouflage Project with you. It is a project of Sabina Keric and Yvonne Bayer who started Urban Camouflage in 2007 during an exchange term at Konstfack – and continued in 2009. their website is built with indexhibit an easy and free way of presenting a portfolio in use by thousands of artists and maybe also a possibility for small hotel and B&B owners to present their accommodation.

Urban Camouflage deals with the question how to camouflage oneself and one’s identity in the commercial space. The costumes are inspired by «ghillie suits», the camouflage suits of snipers and hunters.

The commercial space is a clean and untouched area. Usually there are no artistic activities.

The customer expects nothing out of ordinary in a world of brands and price labels. Our project exeeds the limit and enters the world of commerce without any permission.

We chose the big superstores because of the extreme range of goods, the flashing monitors and the large salesrooms. The camouflaged person blends into the surrounding. He or she can dissapear for one moment and gets the possibility to merge with the supermarket to defend from the noise of commerce.

The costumes were made out of simple and cheap materials, the camouflage effect isn’t only about the colour, it’s also about the three-dimensional structure.

The reactions were different. As before mentioned, we didn’t ask for a permission. Most employees reacted humorously, but we had some trouble with the managment as well and had to quit some actions earlier than we wanted to.

The reactions of customers were also very different. Some were interested and tried to touch the costume, others reacted irritated and stayed in some distance. There were also customers who ignored us completely, it seemed like if they just didn’t want to get irritated by us.