On a recent trip to Vienna I was able to take this photo of Schloss Fuschl as I remembered it.

My DW and I stayed once in the mid eighties in suite 101 (the Sissi Suite) which has a magnificent view over Lake Fuschl that is located 20 km east of Salzburg in Austria.
Actually that stay was due to a misunderstanding with my travel agent (no, not the lady from LA) who I had asked to make a reservation for a room in the much more moderately priced Jagdhof which then was (as it is nowadays) located at the entrance to the actual Schloss. Both the (Jagd) Schloss Fuschl and the Jagdhof Fuschl (Jagd stands for Hunting) were still operated more privately (or by a small company) in those days. However, I don’t regret the decision to stay in the Schloss rather than in the Hof that my wife knew from a previous visit.

The Schloss is said being built in the 15th century as a hunting lodge for the Bishop of Salzburg. In 1833 ownership passed from the cleric to the Austrian imperial dynasty. Eventually it became a ruin and had many owners until 1950/51 when the building was turned into a hotel. In 1954 Harriet, Countess of Walderberg, who, in 1939, had bought another hotel, the Golderner Hirsch (Golden Deer) in Salzburg, that she had turned into fame, bought the property. From 1957 to 1958, Schloss Fuschl became famous as the set of the legendary Sissi-films with Romy Schneider and Karl-Heinz Boehm. Even nowadays, hotel guests can stay in the suite where Romy Schneider was in those days (yes suite 101).

In 1958, salt baron Carl Adolf Vogel, who later also would buy Goldener Hirsch, bought the estate from Henriette and, together with his wife Winnie Markus, turned it further into a luxury hotel. Around 1967, he built rooms in the actual Jagdhof which housed the hunt and pipe museum well worth seeing, which burnt down in 1993.

In 1976, an auction took place, which ended with the new proprietor being the Max Grundig Foundation with seat in Nuerenberg-Fuerh, Germany. On 20th of May 1981, Schloss Fuschl was classified as a historical monument. In 1998,  Rafael Hotels & Resorts took over Schloss Fuschl. 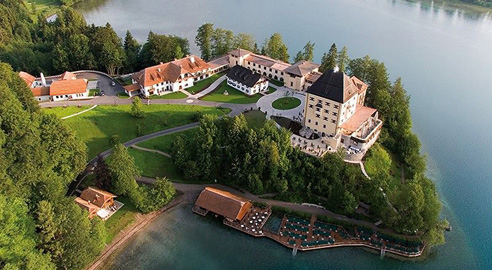 When I turned into the drive way I noticed that it had expanded dramatically since our last visit 20 years ago. Then from this photo only the tower and a minor addition and a spa building were in existence.

I am not sure I will stay there again, as it does not seem have the same style it had back in the eighties, as it is now operated by the Starwood conglomerate…but mainly because I wouldn’t want to spoil a good memory of that erroneous glorious stay in a bit run down hotel, full of antique, beautiful paintings and a magnificent view….and memories are what hotels are for…n’est pas?