Ski Joring (Joering) originated in Scandinavia, but is done all over Europe, Canada and the USA. Basically it is skiing behind a horse a couple of dogs or cars or motorbikes.

The first time I saw it in real life was in the mid fifties on lake St Moritz, the famous Swiss wintersport resort. In 1928 when the first Olympic Winter Games were held in St Moritz, Skijoering or skikjoering was a demonstration sport. Thereafter it didn’t come trough however.

In the next video you can see that it is embedded in the White Turf racing days on the ice of lake St Moritz between proper horse racing with a jockey and trotting races where the jockey is behind the horse in a cart (sulky):

In the USA it goes a bit different. There the skier has to slalom and take some obstacles. More with a Mid West air to it. 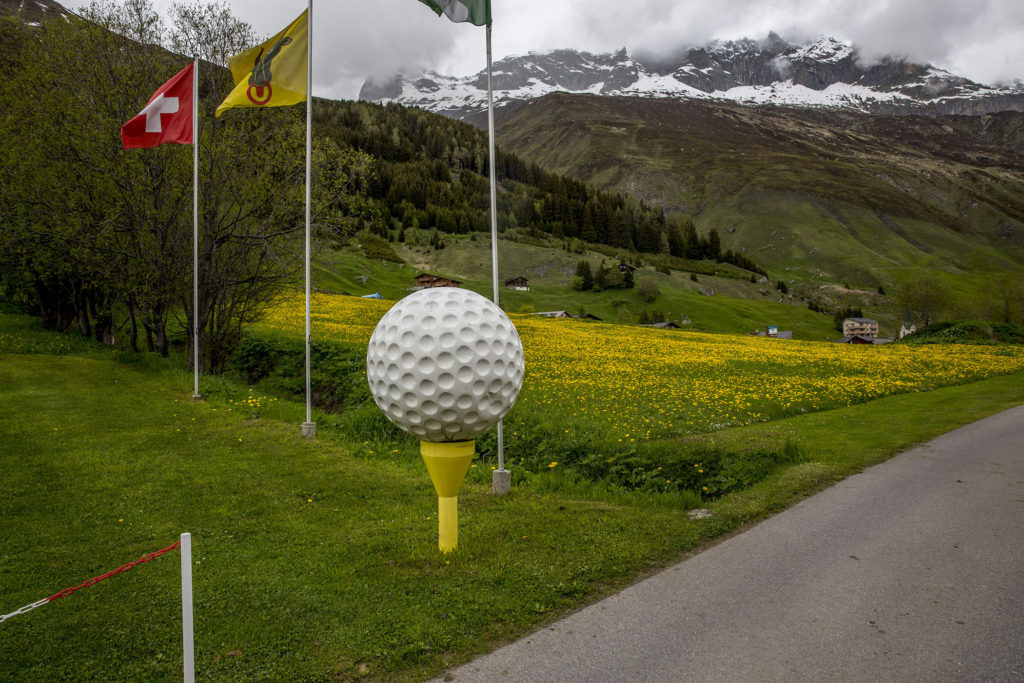 You just walk westward from Realp and you’ll find this golf ball marking the entrance to the golfcourse on your right. On your left you will find the Railway Depot of DFB AG. In my prior post you can find more details of DFB’s History.

As you can see now more clearly the depot just starts left from the Golf Ball. 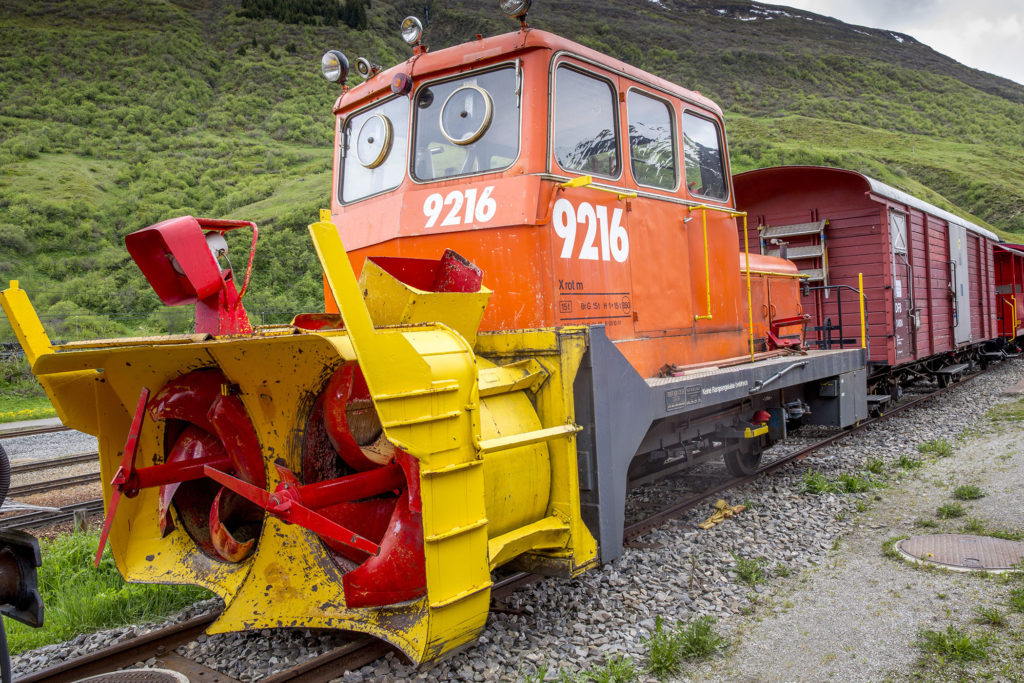 Among others a real snow plowing loc. 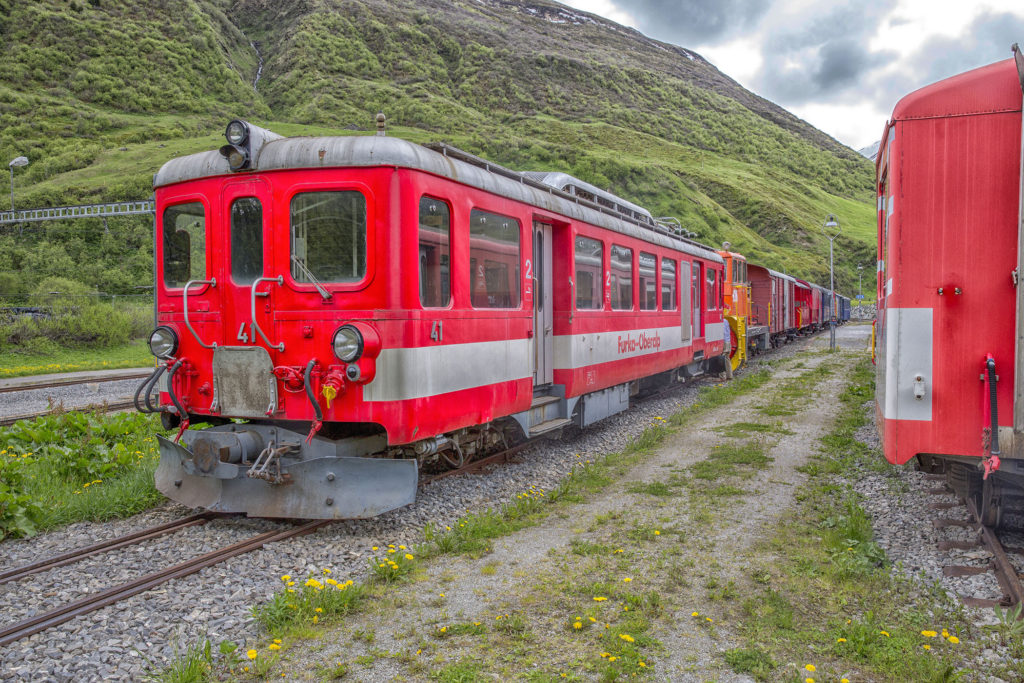 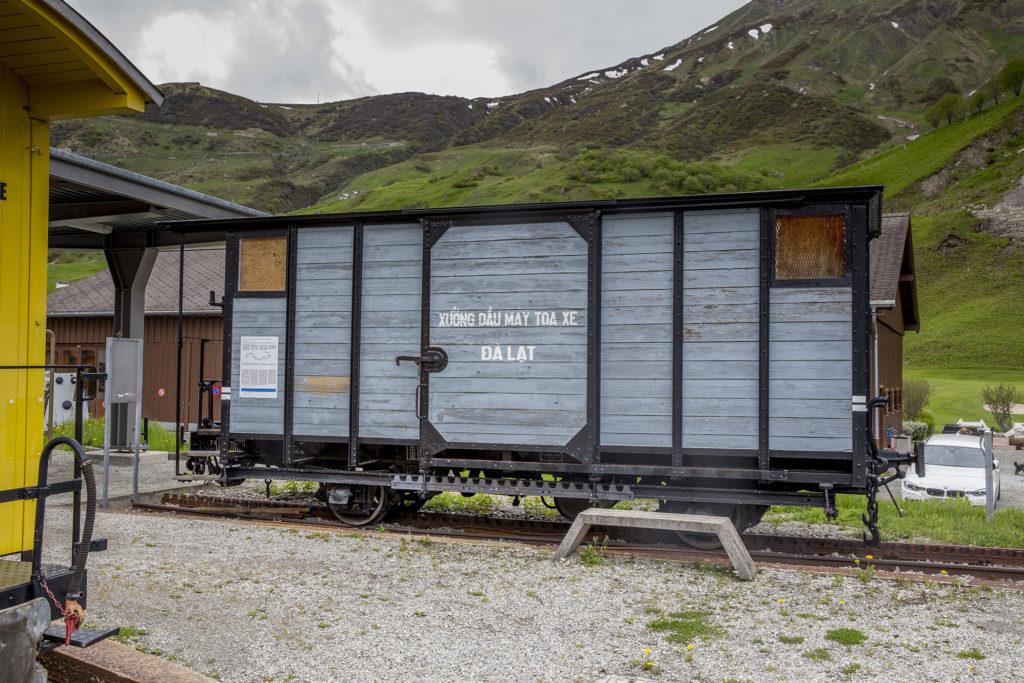 There is a mini museum in this wagon that tells the story of the Vietnamese narrow gauge railroad where this wagon was used and where several steam locomotives were sold to after the mountain route was electrified in the 40ies. If I see it correctly at present 2 locomotives that were repatriated from Vietnam in the 90ies are being rebuilt in the Loc shed. 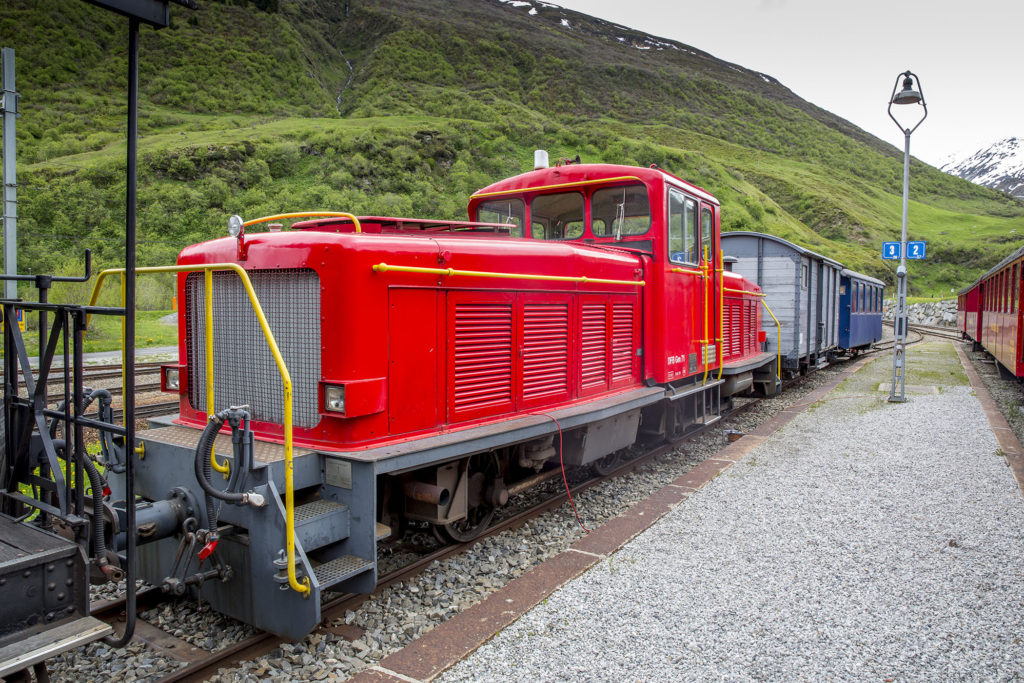 The amateur railway lovers are united in the VFB 0r Verein Furka Bergstrecke or Furka Mountain Route Club since 1983. It has several chapters, not only in Switzerland, but also several in Germany and one  in The Netherlands. It is a reservoir for all the volunteers who succeeded to rebuilt the railway itself and do the maintenance and who work in 3 sheds, one in Uzwil, one in Aargau and one in Realp. Locomotives and chassis are being rebuilt or renovated in Uzwil. wagons are being rebuilt / renovated in Aargau. The Realp shed is for Diesel/electric and for steam maintenance. It’s fascinating to see how they succeed to operate the railway very professionally from the second half of June to the first half of Oktober each year.

The biggest achievement of the club members is the return of the original steam locomotives from the old days. These were sold to Vietnam after the introduction of electrical power in 1941, where they were in operation until the mid-seventies. Afterwards, they were turned off in a locomotive shed, where they were discovered by a member of the VFB. The plan quickly ripened the to put the locomotives back to the old mountain route. With a great deal of effort it was possible to recover a total of 6 locomotives in Vietnam in 1990 and transport them to Switzerland. Four of the locomotives were original BFD / FO, the other two had been built in Switzerland, but were delivered directly to Vietnam. In 1993 the two locomotives HG 3/4 1 “Furkahorn” and 2 “Gletschhorn” were restored in the Meiningen factory of the former German Reichsbahn and were put back into service on 27.3 and 30.7.1993 respectively.

An interesting read on the Furka Steam Railwy can be found at the International Steam site. 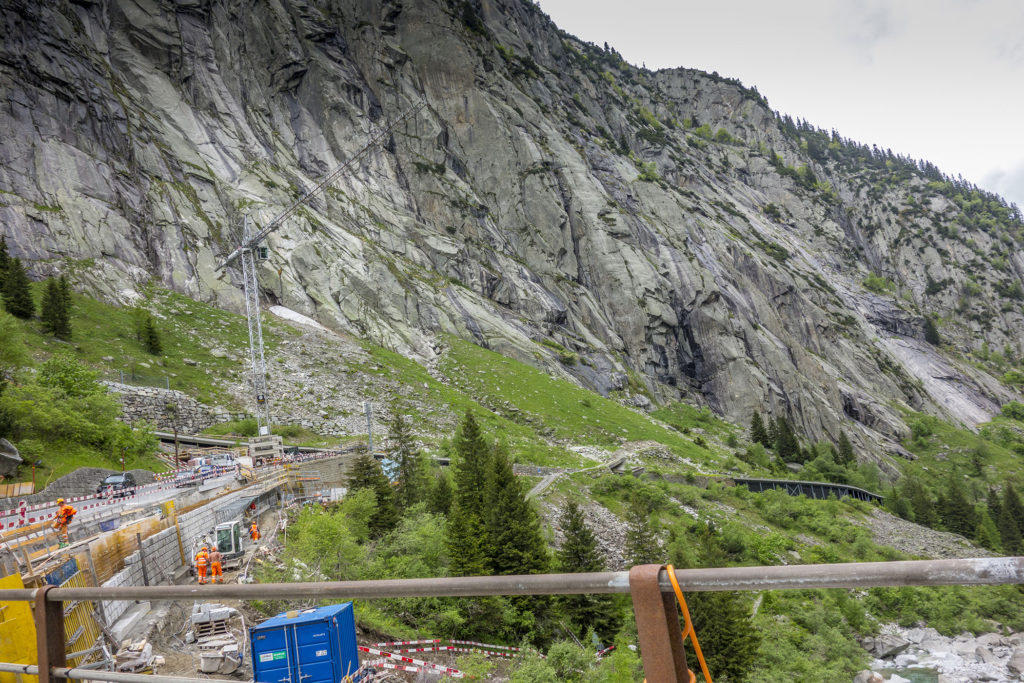 I like traveling by Car. On June 4, 2016, on my way to Italy I traveled the Gotthard Pass as the Gotthard tunnel seemed to take a lot of time because of the traffic lights regulating the number of cars in the tunnel (two lanes only). There I noticed that the road to the Gotthard pass crossed the Furka Pass road. A road to the Rhone Valley in the Swiss Kanton Valais (or Wallis). In the past I had spent a couple of winter sport holidays at the other side of the Furka Pass in the Bettmeralp ski region and was curious to explore a bit of the eastern side of the pass. The first photo shows part of the road being widened which resulted in several one lane traffic light regulated stops. That also took some time. But then a bit further on the Furka Pass Road in Realp I ran into a part of Swiss narrow gauge Railway history, the Furka Steam Railway.

Just west of Realp is a golf course and it mus be one of the steepest golf courses of the world, as it stretches along the road to the Furka pass.
Opposite the golfcourse is a depot of DFB AG with several very interesting trains and wagons. 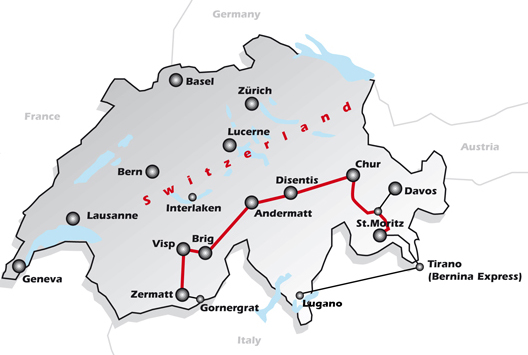 One of the most romantic train journeys is the Swiss Glacier Express which connects the three pioneer cities in Alpine sport Zermatt, Sankt Moritz and Davos. Part of the journey is the narrow gauge railway track between Brig and Andermatt/Disentis. Currently the Glacier express is operated by the Matterhorn Gotthard Bahn and the Rhaetian Railway.

History of the railway track and DFB AG

The first concession for a railroad through Goms  (a distict of the Wallis Kanton rougly between Brig and Andermatt) and via Bedrettotal to Airolo was issued in 1886.

Financial problems prevented the construction. It was followed by numerous other projects.

In 1907 a licence to operate an electric narrow gauge railway with partial gear operation from Brig to Gletsch and on to Andermatt Oberalp Disentis was granted. Since the majority of shares in Brig – Furka – Disentis Bahn BFD was held by French shareholders, the French called the shots and required to operate the railway with steam locomotives rather than electric locomotives,in order to save costs.

On June 30, 1914, the steam operation between Brig and Gletsch was opened.

When the First World War broke out shortly thereafter, the Italian railway workers went home and the construction work between Gletsch and Disentis had to be postponed. Because of the incomplete-ended route and the war, the BFD came in financial difficulties. The French shareholders didn’t want to grant extra money and in 1923 the company was liquidated.

Politicians knew that the still unfinished, 100 km long Alpine railway was a dire need. A new company called Furka – Oberalp Bahn FO was founded and led the construction work quickly to end. In 1926 train-traffic between Brig and Disentis was finally possible.

From the beginning, only a summer operation was provided on the Furka, a winter operation came not because of the exposed position in question. This circumstance was of course an obstacle for tourism on both sides of the Furka and the FO took the both 7-month separate operating higher expenses and lower income massively.

In 1964  first plans for a Furka Base Tunnel were presented. Building commenced in 1973, but only after huge political resistance to the tunneling work. In 1982 the 15.4 km base tunnel was opened despite enormous geological problems. The mountain part of the railway was split in Oberwald and Realp. Electrication was taken away and it fell into a deep sleep. The prince to wake it up came in the form of some enterprising people (then called Spinner) who wanted to take the mountain route as tourist train back into service. The “Furka Cogwheel Steam Railway” DFB AG was founded and with volunteers from the six world track and also the rolling stock has been put back into operation in stages. The total distance Oberwald – Realp could again be driven in 2010. A great achievement of the DFB employees and many many volunteers

DFB AG means a company with shares named Dampfbahn Furka-Bergstrecke. It is a publicly held company that owns the license to drive with trains on the track. 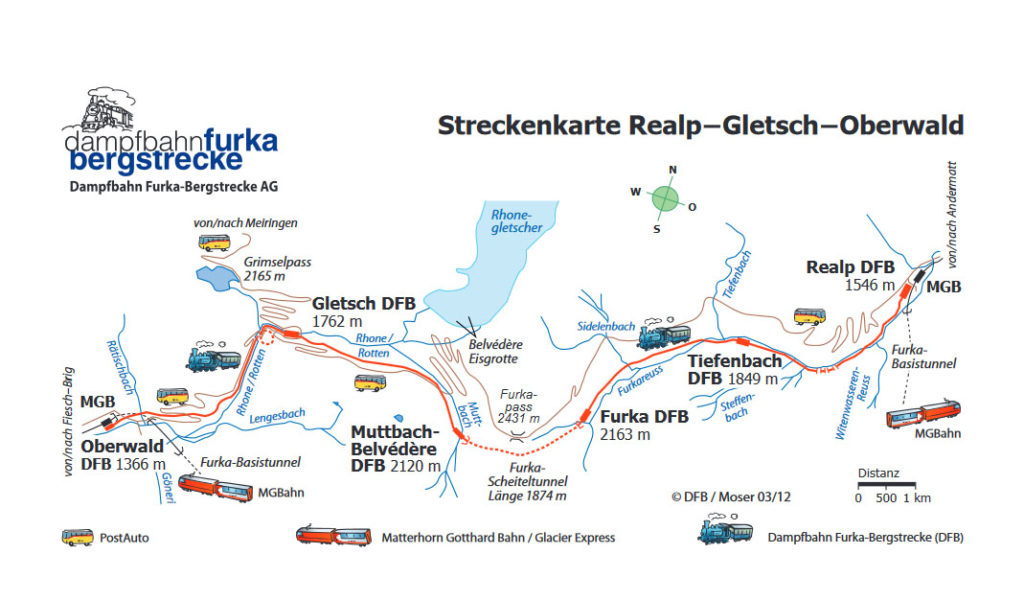 The Glacier Express travels the Furka Base tunnel that you don’t see on this map except both entrances at the Oberalp and Realp sides. The red track on this map is the Furka Steam Railway – DFB AG part. 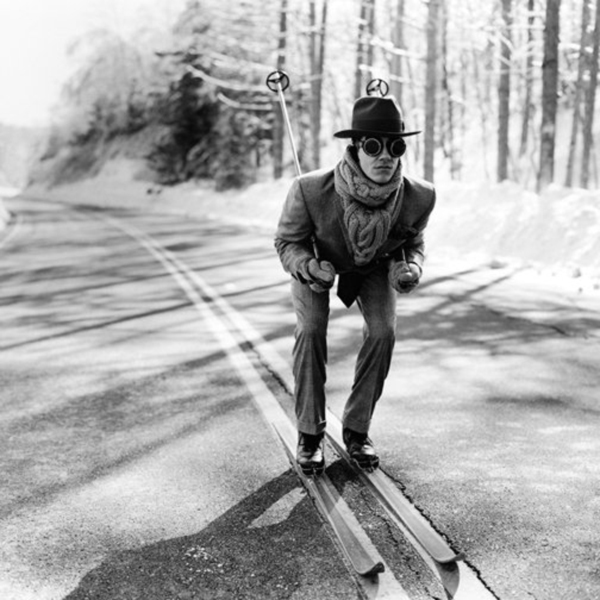 My association with the question

When I ask myself the question: “What are you thinking about?” my first association is always with this hilarious video of a German Coast Guard’s bad English:

I even believe correct English would be: “What are you thinking of?”

I stumbled on the excellent photo of Rodney Smith. He maintains a blog as well: Escape of Life where he shows this photo here.

Rodney Smith graduated from the University of Virginia in 1970. He went on to earn a Master of Divinity in Theology from Yale University in 1973. While at Yale, Rodney also studied photography under Walker Evans. Mr. Smith is a photographer based in New York with years of teaching experience, including a adjunct professorship at Yale University. He regularly teaches a workshop at the Santa Fe Photographic Workshop in New Mexico.

My association with the Photo

During this week of the year I usually am skiing in the Swiss Alps. For several reasons I don’t this year. After seeing the Photo I just looked up the live cam of our favorite Swiss ski resort (Bettmeralp-The Better Alp) and I was thinking: “I wish I was there in stead of here behind my desk and computer” Look at it: 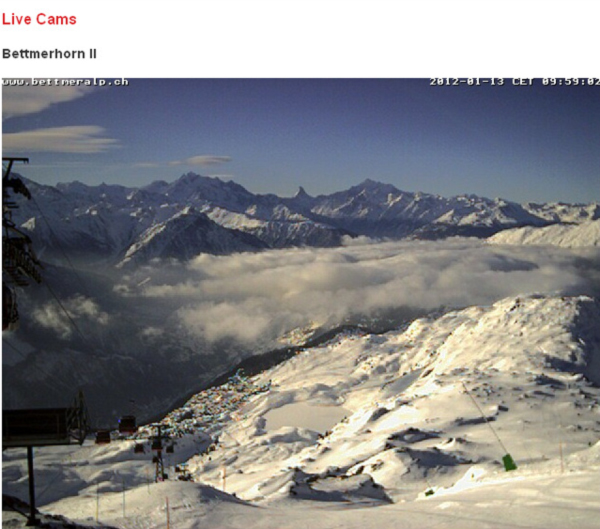 Ah I clicked the cam again shortly before publishing this and I see clouds creeping up to the mountain which is one of the disadvantages of Bettmeralp. Due to its location there is frequently clouds or mist to ski in…I can go back to work now;-) Oops, I did it again, punching the publish button in stead of the save button.

For the last 8 glouriously sunny days I have been skiing around in the Bettmeralp region. Villa Cassel is standing there in the midst of a ski slope at the edge of the UNESCO World Heritage site Jungfrau-Aletsch-Bietschhorn.

Currently Villa Cassel is the home of Pro Natura.

At the beginning of the 20th century, Villa Cassel was built to be the chic summer residence of the rich Englishman, Sir Ernest Cassel.

You can follow its history at the Pro Natura site.

The 25 room mansion was built there at a hight of approximately 1700 m with all the building material and interior being transported merely by man craft and mules, Imagine the piano being transported that way.

Among the guests there used to stay many well known people. The young Winston Churchill stayed there at least four times. He used the time spent there writing, including the biography of his father.

A daughter of Cassel was the later lady Edwina Mountbatten.

On July 10, 1976, it was re-opened and inaugurated as the conservation center for the Aletsch forest.

In the summer it has extensive opening times, but during the winter only one afternoon in the week. I’ll have to see whether I am able to visit it.

Last year I promised already to disclose this mystery home.