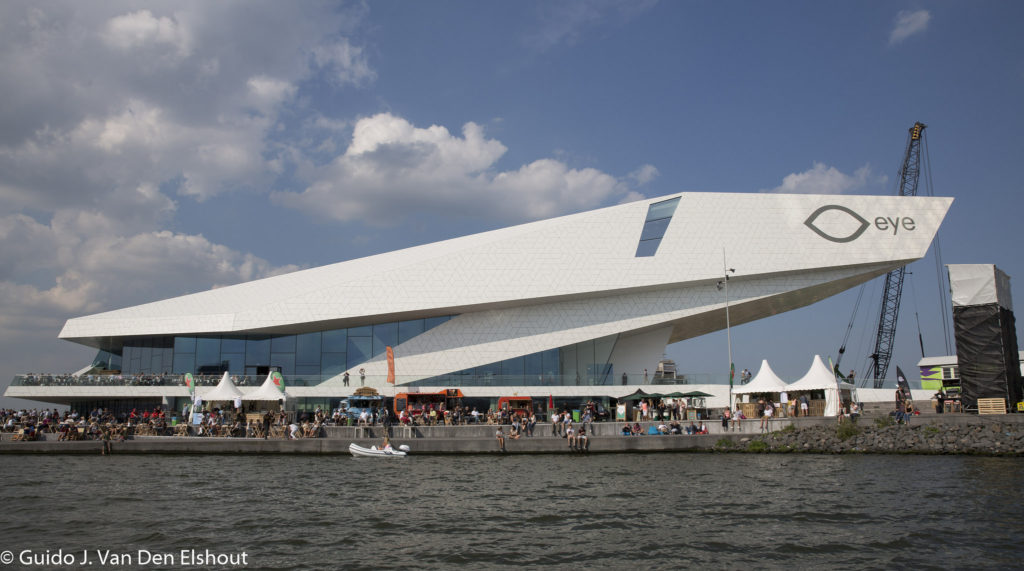 Eye in Amsterdam is the seat of the Dutch Film Institute. Vienna,. Austria based Delugan Meissl Associated Architects designed the Eye Film Institute of Amsterdam. ING is one of our largests banks here in The Netherlands and had bought some ad space at Amsterdam Airport Schiphol. Rather than Milan, we took off for Venice in June to visit the 2015 Art Biennial there and to stay a week in the Marche. Thusfar I’ve been a tad too busy to do some furthe reporting, but I hope to change that now.

However, do see my prior posts in relation to this trip about the Lancia Appia, about Monica Bonvicini and the Seabourn Odyssee In the early morning of Wednesday, August 19, 2015 I boarded a typical Dutch steel motor yacht which was rented by a friend who had invited 3 couples for a tour from Zaandam to IJmuiden and back in order to see the parade of the Tall Ships participating in the Sail Amsterdam 2015 event.

From 8.00 hr on to 10.00 hr the Noordzeekanaal would be saileable from Amsterdam To IJmuiden only and the other way around from 10.00 hr till approximately 16.00 hr it would be one way traffic from IJmuiden to Amsterdam. No freight was allowed at all during the parade.

Directions were given that the absolute speed limit would be 6 km/hr for everyone.

RWS 70 is a patrol vessel of Rijkswaterstaat. Sometimes Rijkswaterstaat is called a state within a state. It was founded in 1798 as the Bureau voor den Waterstaat. Currently it is as an agency part of the Dutch ministry of Infra structure and Environtment. As it is incorporated long before Trains and Cars became en vogue, waterways were the way to transport people and goods. From there Rijkswaterstaat has 3 tasks: Make and maintain the Dutch waterways. Protect The Netherlands from the water by creating and maintaining water defence works (think dikes and dunes) and create and maintain roads.

It is clear to me that the RWS 70 is speeding here at minimal twice the 6 km speed limit without apparent signs that it was on duty. Moreover as the maximum speed of this class of patrol vessels is around 28 knots, I fail to see why it doesn’t give an example.

By this bad example the two small boats following it also apparently believe they are in their right to speed. Your guests come and go via the frontdoor. The Frontdoor of this hotel has etched in its glass that its telephone number is 1. The door must be from somewhere around 1900. Many guests must have passed this door.

This was a hotel long before there were hotel chains like Marriott, Hilton or Starwoord….

The hotel is stil in operation and located in a small village in The Netherlands, not far, only a busride, from Amsterdam. Are you able to guess its location?