In my youth I have extensively traveled the many canals, rivers and lakes of The Netherlands with a 1890 built barge that my dad had converted in a moving house boat in 1960. Many people did that in the 50ies and 60ies with barges that were put out of commission and were not scrapped by generous scrapping subsidies, because road traffic became more fashionable in those years than transport over water. As a student we even hauled motor yachts from the Mediterranean through France and Germany to The Netherlands. I say a moving house boat, because it it moved more like a crab than it sailed. Comfort was Spartan. Only cold water and no shower. In the first years even no heating. But we had a lot of fun wit it. I learned from it that The Netherlands can be best viewed from its waters. 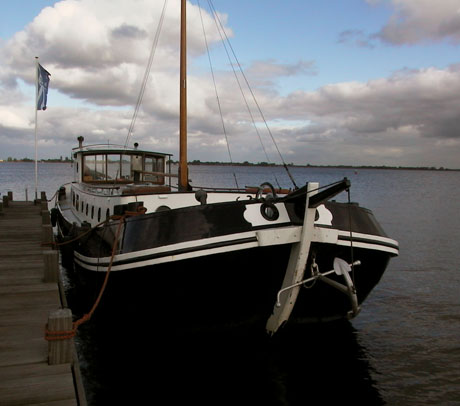 In 2001 we sold the barge, named Vrouw Holle, to an Englishman who after an extensive renovation is now underway with it somewhere in Europe.

Later on with friends and with my current small fast motorboat Haagsch Schuim I have traveled much longer distances.

I must admit I sometimes do envy the current owner of Vrouw Holle and dream of having my own sailing house again. Never necessary to be in one place for long. Always possible to adapt your neighborhood to your mood. Do you want to be fashionable? Moor in Amsterdam, London, Paris or in Berlin all cities that are navigable. Do you want peacel? Seek a mooring place somewhere in a remote place like one of Finland’s 1000 lakes. Much more freedom on the water than when camping on land. And rather than carrying around all sort of stuff to your second home, caravan or yacht, you have your home with you: Ideal!

The same dream did 5 Dutchman*) set out to develop the Qrooz which is a combination of a house a boat and a lounge. 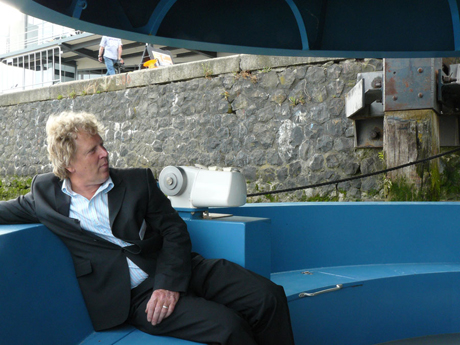 One of the 5: Dutch industrial designer Huibert Groenendijk who also designed the Roterdam watertaxi: 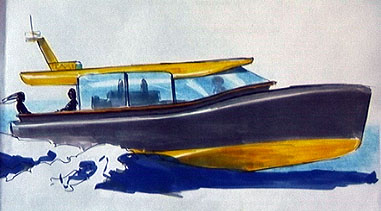 Although he probably wants to forget about it, Huibert also designed a motor yacht version of the Rotterdam Watertaxi: 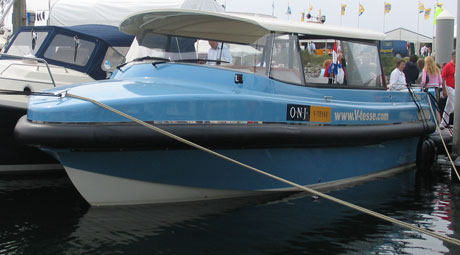 The V Tesse or the Blu V-Tesse that sadly disappeared from the market. 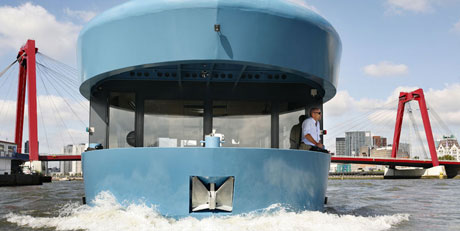 Back to the Qrooz, a design that seems to work as 2 Qroozes have been launched till today and number one has cruised the European waters extensively already.

It has an enormous living space. It comes in Mini, Large and XL sizes and the prices range from Euro 464,000.- onward. (yes you probably have to sell your house to afford it:-)

5 thoughts on “Cruise Europe in a Qrooz (Dutch Design 45)”