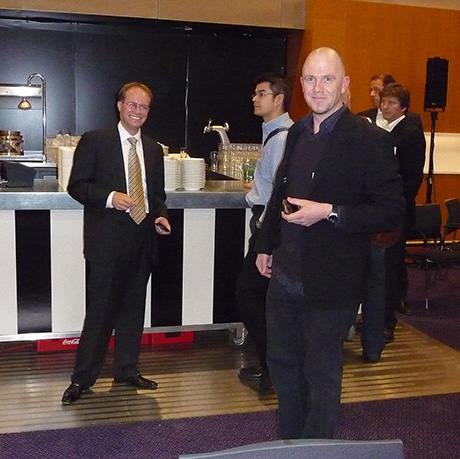 I’m back from the Enter09@Amsterdam conference.

Before posting anything, I had to address a technical problem here, as the electrically opening gate to our backyard doesn’t function anymore. Some of you know that I sometimes describe my job here at Haagsche Suites as a “Jack of all trades and Master of none”.
It appeared that a deliverer of glass to my neighbor (a tenant of mine) has driven against the safety provisions of the gate this afternoon. Nice having a security cam available to prove who did it. The only problem is it takes considerable time to sift through lengthy footage of stills. But I have pinpointed the trespasser. I find it so funny to see my neighbor standing there in person and looking when it is happening and simply not having the decency to warn me what happened. Now I’m really looking forward to a whole weekend without a functioning gate. – It turned out later he had tried to give me notice by telephone on the answering machine -.

Back to Enter09. The Blogger meetup yesterday afternoon turned out to be a Mini Blogging Meetup. Luckily with some beer, chips and a friendly chat.

Now I can prove you beyond doubt with the above photo that Kevin Can Smile. Hurray! (see my 10 Questions (15) For: Kevin May of Travolution)….even when he had just decided to remove Virgin screen grabs from his site (see his Tweet and these posts of: Travolution and of Alex)

The photo shows further Stephen Joyce and Jens Traenhart (he is the one with the really huge smile). 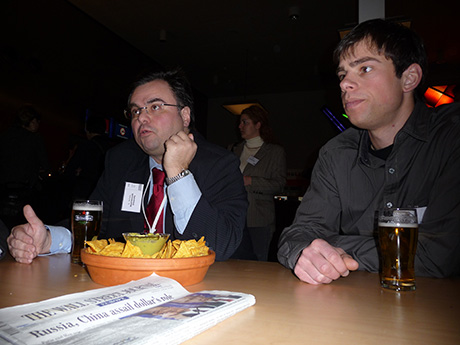 This photo shows Dimitrios Buhalis, left, who was also conference chair and a young man of the Austrian Tirol Tourist board whom I hope will give us his name when he reads this. Added: I found him out before he me. It’s Hannes Egger, one of the authors of Blog Tirol. Oops I should have known: I’m on their Blogrol…Thanks Hannes and do come to ITB Berlin!

That made up a meet up of 6 Bloggers while William got lost in Amsterdam.

Later Stephen offered me dinner that I chose for him to be real Dutch “Suddervlees” (also known as “Draadjesvlees”) at Moeders a decent restaurant in Amsterdam that serves traditional Dutch Food and the name of which means Mothers (or Moms or Mamas) it is fested with photos of moms.

Thanks Stephen and we will meet again in Berlin where I owe you one.

From the conference itself I don’t have much to report to you, as I had a lot of other things to do, so I could not attend, but my own presentation and two sessions. I had especially to finalize my own first ppt presentation. When I have translated it in English (it was for the Dutch Day of Enter09 in the Dutch language), I’ll put it up here.

I posted some more photos at my Flickr set Enter09@Amsterdam

It was mentioned that Jens has new plans wit Tips from the T-List, but I didn’t attend that session. Maybe more somewhere else.

Added: Kevin used one of my Flickr set’s Enter09@Amsterdam photos for a Caption Contest