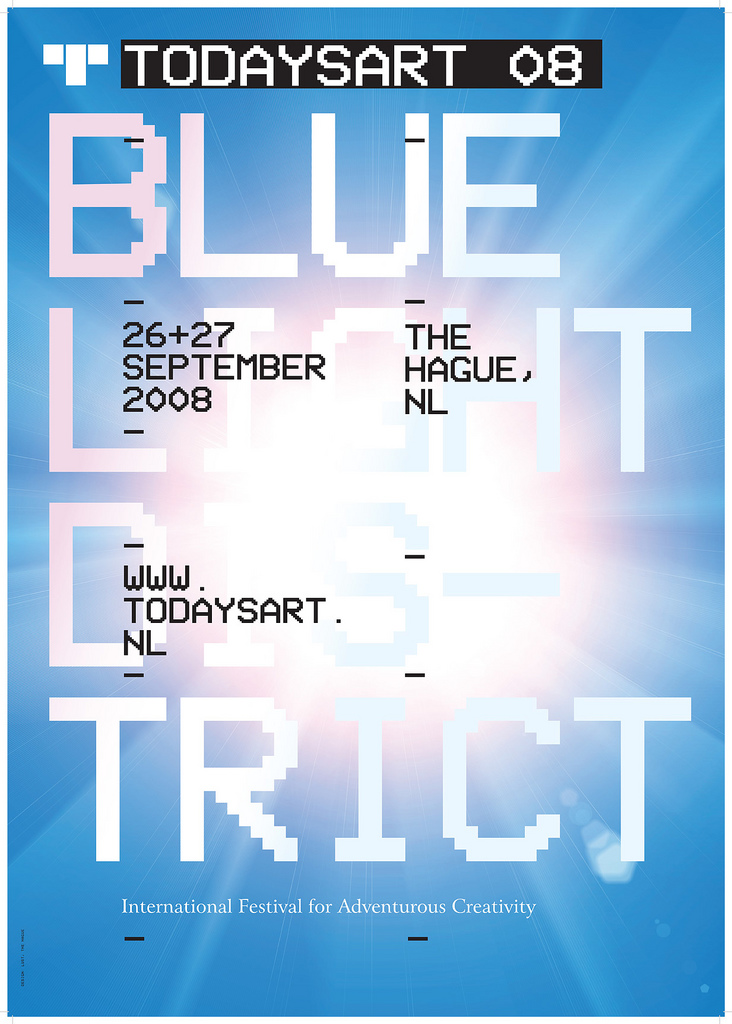 The 2008 (4th) edition of TodaysArt, the international festival for adventurous creativity in The Hague, The Netherlands, will take place on 26 â€“ 27 September 2008.

You have to come to The Hague if you’re interested in:

Every year, for one weekend, the TodaysArt Festival transforms the city centre of The Hague into an inspiring stronghold of creativity and audiovisual experiences. This year, over 200 artists will contribute to the festival, where many different art disciplines are represented, such as film, modern dance, visual art, photography and music. The fourth edition of the TodaysArt Festival will take place on the 26th and 27th of September, at 20 in- and outdoor locations. The title of the festival is Blue Light District, referring to the trademark blue artwork of the festival.

For the first time in TodaysArt-history, the Dr. Anton Philipszaal will be a part of the festival terrain next to annual venuas such as the Paard van Troje, De Nieuwe Kerk, Theater ah Spui and the Atrium (city hall). 1.890 Chairs will be removed to make this impressive concert hall fit for a large amount of festival visitors.

The Blue Light District, is the name of the festival area, in which a variety of art projects and installations are presented in interaction or confrontation with the urban infrastructure and architectural spaces. Consequently, there is the opening concert Station to Station from Staalplaat Soundsystem, Erik Hobijn en Mike Rijnierse, including trains as musical instruments and using the environmental sounds to create a sound composition. Even the thousands of bicycles in front of the station will be integrated in this sound piece. In addition there are several project anchored around the spectrum of artificial light producing stunning visual effects at various locations around the festival terrain. Many of the festivals activities take place in the public space where we created an infrastructure of large transparent greenhouses sheltering temporary galleries, project spaces, bars and restaurants.

Another highlight is the presence of State of Sabotage, an internationally recognized micronation in the city hall of The Hague. 1,000 official passports will be printed for visitors who bring a photograph. Also LAb[au], the meta designers from Brussels that transformed the Dexia tower in Brussels into an interactive canvas, will be presenting several special projects, including EOD02. An installation containing fishes that communicate with electrical signals, which are collected and transmitted into sound.