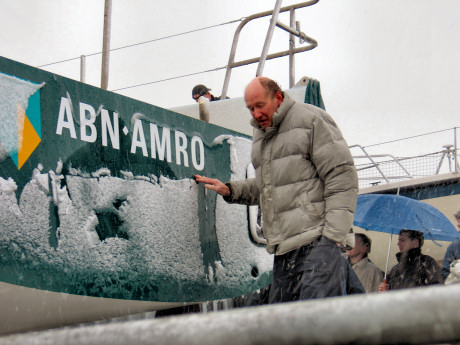 My friend Bas had wiped off the snow from ABN AMRO 2’s name, later nicknamed White Betty, just prior to its launch.

Bas was responsible for the styling of the two ABN AMRO sponsored sailing boats and the styling of all means of communication around the two ABN AMRO teams competing in the round the world Volvo Ocean Race 2005-2006 edition that was won by White Betty’s sister competitor, ABN AMRO 1, aptly nicknamed Black Betty. After the America’s Cup the Volvo Ocean Race is the second most prestigious sailing race.

Today the press announced an unfriendly take over bid from three banks, Royal Bank of Scotland, Fortis and Santander, who want to divide ABN AMRO in several digestible chunks. It is the second bid after one from Barclay’s that seemingly intends to keep ABN AMRO BANK more in tact than the threesome, but conditioned its bid upon the sale by ABN AMRO Bank of its US subsidiary La Salle to Bank of America. In the meantime a Dutch judge has ordered that ABN AMRO seek approval for the La Salle sale from its shareholders, something I believe would only be normal, but what the ABN AMRO board wants to contest up to the Dutch supreme court.

So, probably the logo and the brand will disappear with the company before long, which is a pity for a company that goes back to the nineteenth century when the Dutch King initiated one of its predecessors.