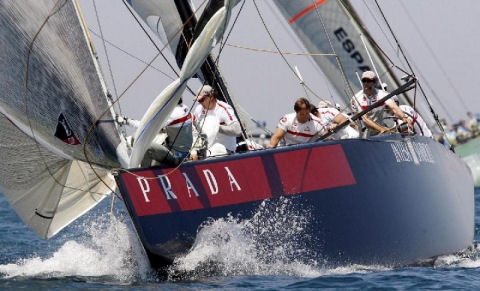 The LV Ranking link is the quickest way to be kept updated about the current rankings in the semifinals of The Louis Vuitton Cup.

Today at 15.00 hr the second flight will start in the best of nine match races of the LV Cup Semifinals.

Yesterday, in the first flight, USA team BMW Oracle Racing who have their own BMW Oracle racing Blog surprisingly lost its first race from the Italian team Luna Rossa Challenge 2007, probably because its 18nd crew member was the boss himself, Patrizio Bertelli.

The Kiwis Emirates Team New Zealand had obtained the right to choose their adversary from the other 3 contenders. They choose the Spanish team and won their first race.

The America’s cup is an excellent means of city marketing. The Cup itself brings a lot of publicity to Valencia and it triggers even more:

Port Americaâ€™s Cup could become the second Formula One city circuit in Europe. The area of the Port will be part of the route that will host the first race of the 2008 season.

Bernie Ecclestone, president of Formula One visited Port Americaâ€™s Cup Thursday (may 10), accompanied by Flavio Briatore, Sports Director of the Racing Team that is this year defending the world title won by Fernando Alonso in 2006. Both enjoyed lunch in the Foredeck restaurant within the Veles e Vents building, located in the center of the future circuit , due to be the setting for next yearâ€™s elite motor competition.

At the moment of publishing this post, 15.45 hr, and thanks to the (paid) live tracker America’s Cup Anywhere I know Emirates New Zealand leads and Luna Rossa leads in their respective downwind legs.