Recently the blog Travel in Blogs seems to have started a sort of Travel Blog community. From the outset it seams a great idea, but there is hardly anything available on the site about the site, about who does it and why they do it.

The basic idea is that Bloggers submit stories that can be voted upon like the Diggs and Del.icio.us es of this world. In one view you can get the hottest posts. But there are many other alike initiatives. For the moment I am reasonably content with the Google reader which loads very fast and gives you a fast means of browsing the blogs you like to read. Another issue is that the admin (whoever he may be) seems to get his ideas from a blog that looks as if it is a pure scraper or maybe even a Splog. I wont mention it here because I don’t want to grant it a link.

It is registered in the name of a thus far undisclosed person at the same address as the “aggregators” or “scrapers” i am referring to:

There are some ramifications here why I am still not sure.

I suppose if it would be non – human, they would have programmed the spider bot so that it would publish posts (I submitted 3 or 4 myself) as soon as possible and would not leave them unattended for 48 hours or more. No attention is much more human than bot alike I would think.

Furthermore, I believe that I have seen Albert Barra making a comment somewhere that he had to do with this Blog. But I can’t reproduce the comment anymore. That would also explain why there is a Spanish section. Ah, wait, it was not a comment I can reproduce what I thought I had seen: it is this post More about the T-List, on his Blog, but my Spanish is insufficient to understand what he tells in his post, even if I use Alta Vista Babel Fish.

Also it is notable that as a comment on a post by self proclaimed spin doctor Martin Schobert, of the Austrian Blog in the German language, Kulinarisch Reisen (i.e. Travel Culinary) about The T-List a certain Danay asks attention for the Blog in question:

We have recently launched TravelinBlogs.com.

TIB is a social network for the Travel and Hospitality Community. This site allows you to submit an article that will be reviewed by all and will be promoted, based on popularity, to the main page.

We encourage all Blogs of the T-List to sumbit their content and get additional traffic to their blogs.

Danay seems human and like me not a native English speaker (“sumbit”).

So again: is it a hoax of for real, what do you think?

I’ve taken out the link as, sadly, when Albert tried to move the site to another server, he lost all of it. Later I met Albert at WTM in London. He is a very likable person.

The main wisdom is that the more links point to your website, the more traffic you generate and the better the (Blog)search engines can find you. So how to spread the word about your Bog?

Some examples of techniques to get the desired results are:

The T-List was launched yesterday by by Mathieu of Radar who modeled it after the Z List, originally launched by Mack Collier of Viral garden:

Thanks David Ourisman of Travel Horizons for creating a T-List logo that proudly appears at the top of this post.

Look at my T-List page for an as complete as possible updated T-List. 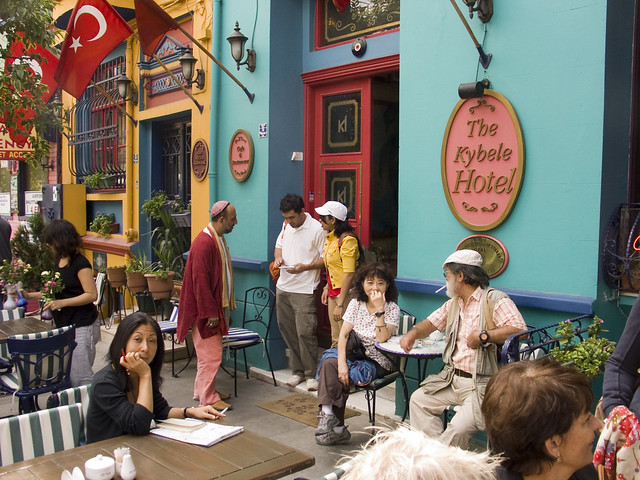 I am starting this post at the end of 2006 because a journalist of the Guardian has asked me to give some insight comments about booking your travel via Internet. Well, what better answers to such question than to describe what you do on the Internet to get some answers while it is for real?

Once a year, in September, we use to travel with a very heterogeneous group of Baby Boomer friends to a city to experience Modern Art. The name of the loosely organized association is aptly chosen “Art en Route”. It even has its own logo. Art en Route has its own Small-Museum-of- Modern-Art-director who gives the group lessons in Modern Art and prepares briefs about places to visit and artists to see and acts as the Art guide in the city. He is very well humored and has to be, because the group often gives its cynical comments about the “Artsy” character of what is displayed. We (he and Art en Route members) learn a lot!

Earlier trips were to Barcelona, Berlin, Paris, and Venice. The Berlin and Venice trips I attended, The rest I had to forgo, as I had to look after our own hotel guests.

In 2007 we are to visit Istanbul for the Istanbul Art Biennale.

The frequent travelers of Art en Route and I -as the Hotelier and Internet geek- of Art en Route are asked for Hotel suggestions. After I had suggested Propeller Island City Lodge for our September 2006 trip to Berlin, I am afraid some members of the group will vote against any of my suggestions.

However, I should mention that I suggested this Hotel only after my DW called me up in the middle of the night when the trip went to Barcelona in a prior year (2004): She had just checked into the group’s hotel of choice and very much to her dissatisfaction. The room had only one window that looked out on a blind wall of an in-house light shaft and the pipes of the hotel kitchen and various air conditioners were blowing their air and stink with a lot of noise into the shaft. She demanded me to look for another hotel on the Internet immediately. Also the hotel was very shabby and located in the center of the ”Quartier Des Madames”. Hence she wanted to move out and check in into another hotel immediately. Apart from the fact that then it took even more effort to find a suitable hotel, I didn’t succeed to find any other hotel room at all for her, as Barcelona was fully booked, at least according to the consolidators and very few hotels had their availability accessible through their own sites in those days. Therefor I am always hesitant to book last minute, whatever the deal may be. Unfortunately on the other hand my DW and I are usually forced to book last minute by our work.

Internet is more about randomly than scientifically approaching such questions. Therefor I describe my rather random (in earlier years the buzz word would be fuzzy) approach while avoiding the Five Star Alliances of this world.

A couple of hours went by. Now, like another Blogger, Heather Green at BusinessWeek put it eloquently recently: I should take a walk around the block to let my brain do something else than troll: surf and read and read without my brain taking anything in….on the other hand: I use to surf as an alternative way to walking around the block thinking about issues that come up in my work…

My first conclusion is: Look at various dedicated hotel sites, be it luxury, design, romance or whatever you have in mind and then check back with the bigger sites as Booking, Expedia and the like.

My second conclusion is: First I should have called upon a friend of mine who is a big shot in business, has lived several years in Istanbul not so long ago and still frequently travels there….

Will be be continued somewhere in February, when we have Art en Route’s opening of the season session.

In the meantime I would appreciate suggestions from readers.

Update: Eventually we staid at a Hotel near the Kybele hotel which had a nice lobby for a drink.

It was a happy year for me, 2006. I started this Blog adventure and are having fun with it, although it takes a lot of time which I do not always have. It takes more time than you would anticipate before you start. Because of the amount of time involved I believe that the number or derelict Blogs will soar in 2007 and that the number of new Blogs started will decrease.

The last days of a year often makes you wonder how many unfinished objects, or UFOs you have left unfinished.