November 10, 2018 Scheveningen is the place to be: The RedBull Knock Out motorcross on the sandy beach will contribute to the celebration of 200 years of Scheveningen’s beach resort. RedBull has produced a spectacular intro to this beach race by a motor cross driver Robbie Maddison who drives his motor over the Dutch canals and the canals of The Hague (where I volunteer as skipper for the flat boats that tour the canals).

That it is a risky stunt driving over water you can see in the next video. The making of the promo where you can see Robbie sink in the sea when he trips in a wave…

I’m proud dad as my dear daughter #2 sits in the 200 years Scheveningen celebration production team and more proud to see the son of good friends act as one of the cameraman for this spectacular stunt. 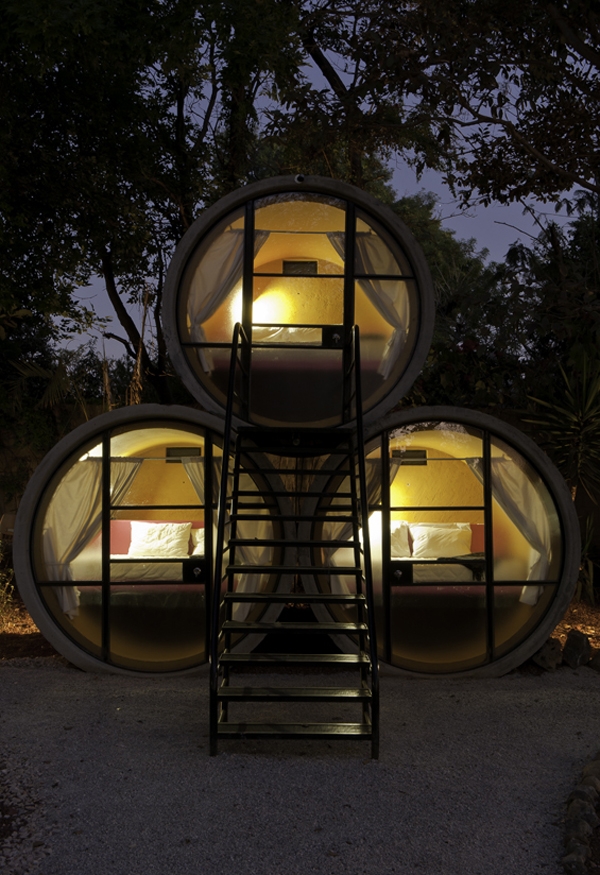 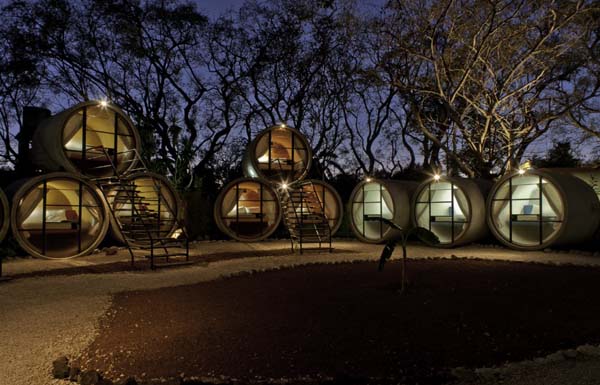 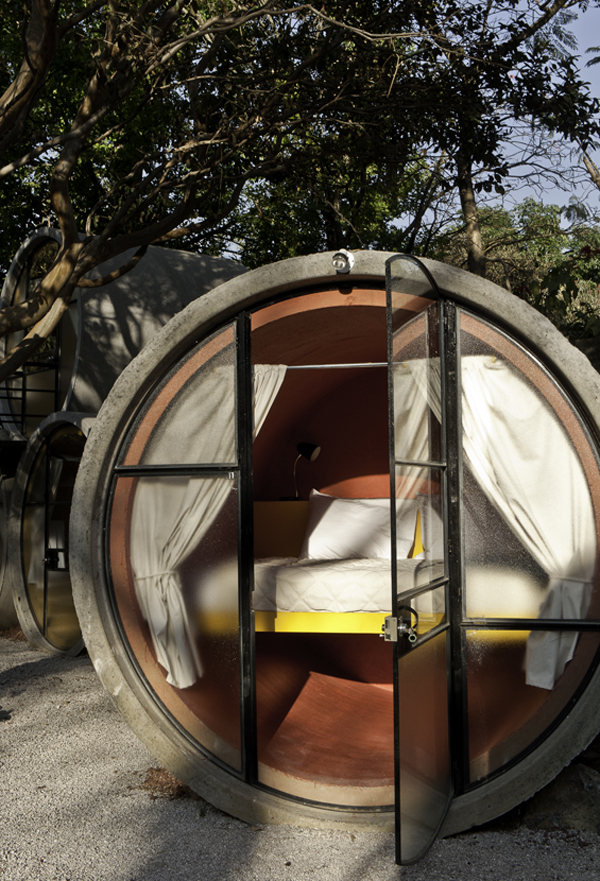 Time to introduce another unusual hotel.
Tubohotel in Mexico has taken the idea of the Austrian Das Park drainpipe hotel to further perfection by installing a couple of drainpipes in a orchard in a little town, Tepoztlan, Morelos about 45 minutes south of Mexico City.

In their Faq they promise more than just climbing the surrounding mountains: 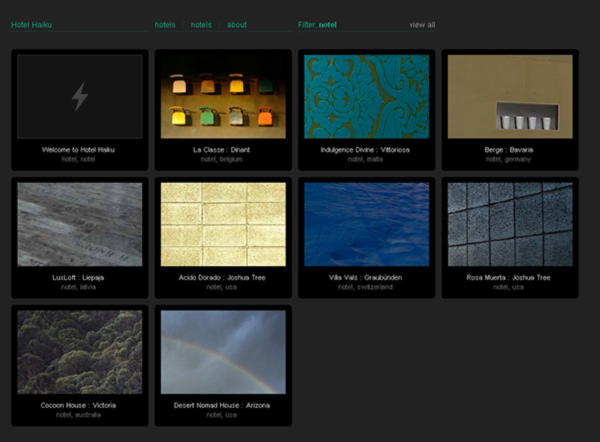 You might consider a notel after visiting a new site on the block: Hotel Haiku, curated by Garri Rayne.

Hotel Haiku has taken up the idea of describing Hotels and, more importantly notels in a real Zen way, with a Haiku:

I’m particularly attracted to the term notel, because when I started out as a hotelier and was developing our own unique 3 suites only “hotel” Haagsche Suites, I had for some time the idea of naming it Not a Hotel. Eventually I decided to name it “Haagsche Suites” (i.e. suites of The Hague), because Not A Hotel sounded a bit negative. Never thought of notel.

I congratulate Hotel Haiku with the invention of this term notel. As they describe it:

So notel is beyond Hotel, beyond Hip Hotel, beyond Boutique Hotel, beyond Design Hotel or beyond what hotel have you and at the same time it is below the usual hotel radar. Thank you Hotel Haiku!

First Hotel Haiku (@hotelhaiku) found me via Twitter and I noticed it without paying much attention. Then I found out more about the site via our friends over at Tnooz. I refer to their review of the Hotel Haiku site.

I’m set to explore the phenomenon further and created even a notel category, because I’ve featured some notels here on the blog already.

Update:
As Garri pointed out in his comment the undercast n is essential for the idea behind the term notel , so I have edited all, but couldn’t withstand to add little bit of my own: red 🙂 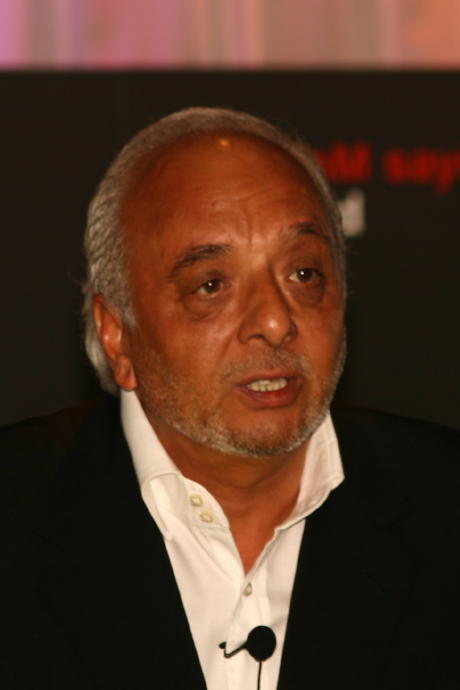 He looks a bit tired, but here is Rattan Chadha, the founder of CitizenM and former owner of the Mexx fashion company who opened the press conference.

Some quotes as a starter:

Michael Eman, the F and B manager who developed the F and B concept from the beginning adds: “We have two very important moments here: The coffee moment and the cocktail moment: All our ambassadors are first class barristas and cocktail makers”

Update
As usual I have been wrestling with both my old heavy laptop and the Wifi system in the Citizen M hotel room. The Blue Tooth connection of the 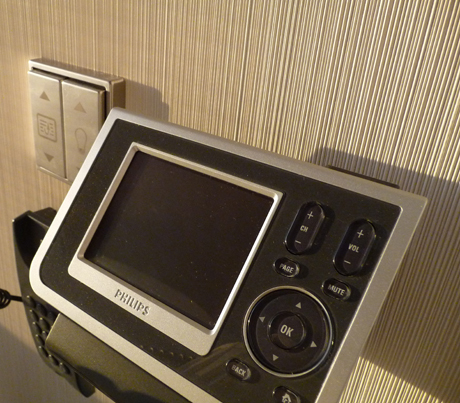 Citizen M Remote “do it all” Control, developed by Philips,

interfered with the remote control’s other functions and was not stable at all. After wrestling for an hour and a half I gave it up. 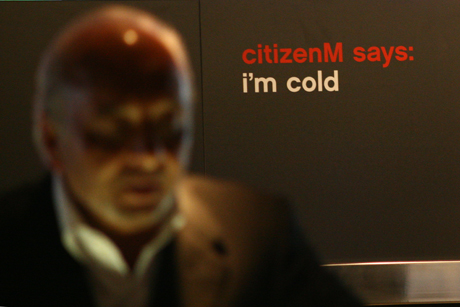 Rattan Chadha may not like this photo, but I caught him with one of the Citizen M signs above the cold section of the self service food and beverage wall: “Citizen M Says: I’m Cold”. Well I felt left a bit in the cold with the non functioning of the remote control/Wifi combination. BTW here at home I rechecked and the old and heavy laptop does function perfectly with my own Wifi.
As a final observation I wonder why they didn’t let it read “Citizen M Says: I’m Cool“

When I wrote about this now closed Berlin object of art/experimental one room billboard hotel in December 2007, I didn’t imagine that people would actually sleep in it. I visited it in March when I was in Berlin for ITB Berlin. Henri Roelings, who is one of the guys behind WiWiH (Who Is Who In Hospitality) had booked it during ITB Berlin and had actually slept in it a during ITB Berlin. On the corner of Kommandantenstrasse and Neue Gruenstrasse one finds this billboard that hides the hotel room behind it. The room has no windows, so it is definitely a room without a view. 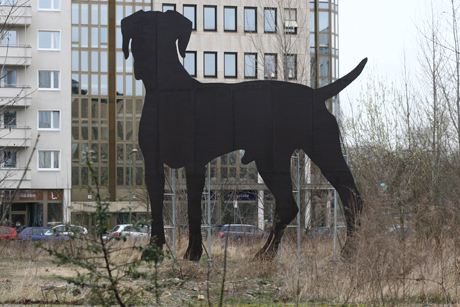 Henri commented that when he stayed in the room, he had slept very comfy,but he was a little bit afraid that people could easily fire him up by making a fire under the room. Luckily the giant steel watchdog opposite of the hotel room has been watching over his safety.

Henri had the ladder to enter the room so that he could advertise WiWiH. 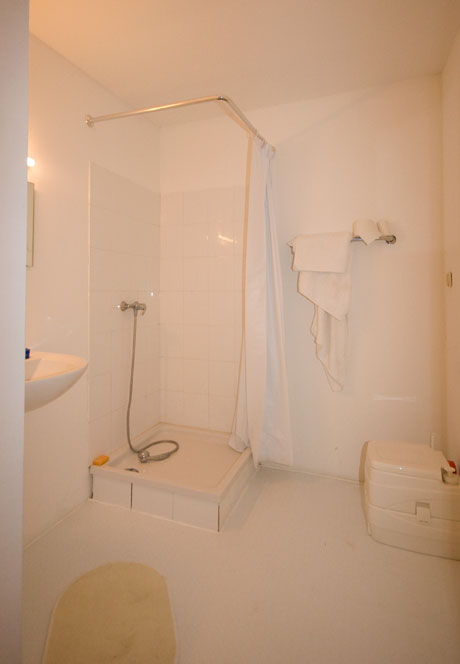 Once entering the hotel room I was surprised to find a real bathroom. There was water for the wash bin and the shower via a reservoir. There was a chemical toilet and there was electricity. 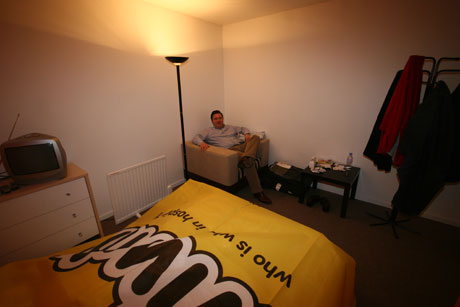 Here you can see that you could hang your clothes, had a TV set and a drawer chest and an easy chair. All very doable. 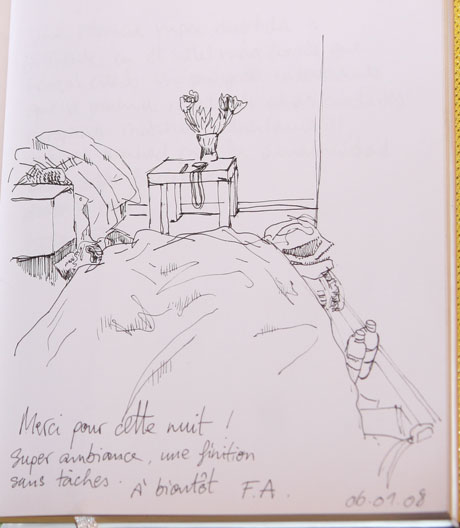 Not only the hotel room is artsy. According to the Guest Book its guests are artsy a well and they liked it! 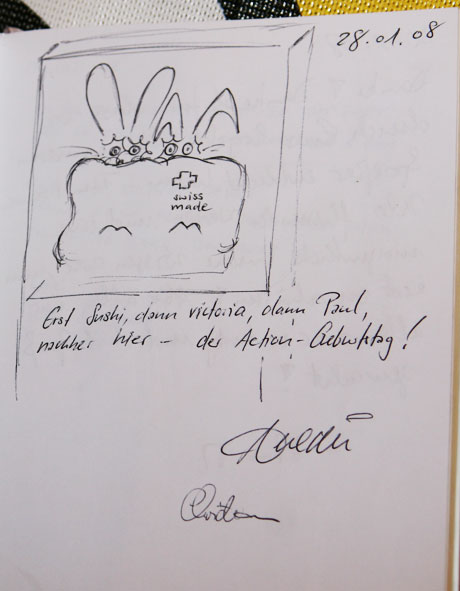