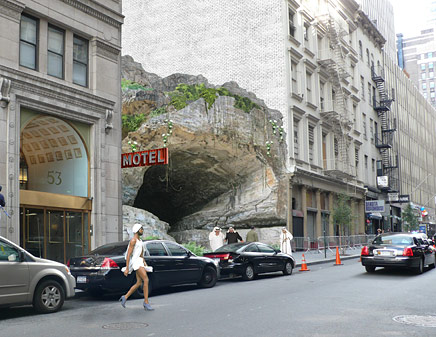 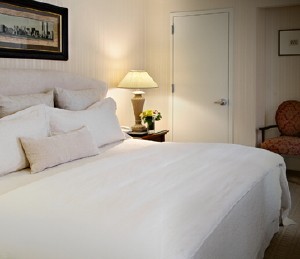 The Benjamin, a Manhattan hotel located known for its pillow menu and other sleep-focused amenities, has announced its 10th Anniversary Package. The package starts at $439 per night and includes one 40 Winks spa treatment at the hotel’s Wellness Spa, a bottle of champagne, choice of a pillow from the hotel’s 12-choice pillow menu delivered to the guest’s home after their stay and a stay in a one- bedroom suite. The package is available for stays through December 31, 2009. 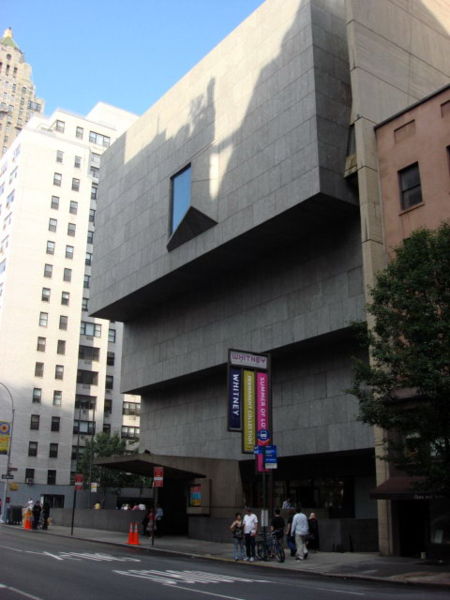 Titled Whitney Museum to Receive $131 Million Gift, Carol Vogel of The New York Times reports that Leonard A. Lauder, chairman of the Estée Lauder Companies and, according to Forbes magazine, with a net worth of $3.2 billion in 2007, said on Tuesday in a telephone interview that his art foundation would give the museum $131 million, the biggest donation in the Whitney’s 77-year history. Mr Lauder is also chairman of the Whitney Museum of American Art.

One requirement of the gift is that it is not to sell its Marcel Breuer building on Madison Avenue for an extended period. Mr. Lauder as an architecture lover believes the Whitney and the Breuer building should not be separated.

The Whitney announced last year that it planned to open a satellite museum downtown in the meatpacking district of Manhattan, which stirred speculation that it might sell its Breuer building.

The gift includes $6 million to cover expenses until the donation is complete, which is expected to be by June 30, 2009. The money is a major infusion for the Whitney, which has been historically under-endowed. Its new endowment total of $195 million will still pale in comparison with those of institutions like the Museum of Modern Art, with an $850 million endowment. (Ronald S. Lauder, Leonard Lauder’s brother, is a trustee and former board chairman at MoMA.)

In November the Whitney announced that it had reached a conditional agreement with the city’s Economic Development Corporation to buy a city-owned site at Washington and West Streets, the same place where the Dia Art Foundation had planned to build a museum. (In October 2006 Dia said it had scrapped that idea and would seek a different site in the city.) The Whitney satellite is to be designed by the Italian architect Renzo Piano.

Mr. Piano was also the architect for a proposed nine-story addition to the Breuer building that was abandoned in 2006.

The Piano scheme was the third time in more than a decade that the museum had commissioned a celebrity architect to design a major expansion, only to pull out.

Mr. Lauder’s gift is not the first major donation he has made to the Whitney. Since becoming its chairman in 1994, he has led the campaign for the new fifth-floor galleries in the Breuer building, which are devoted entirely to the permanent collection.

Six years ago he led a three-year initiative to acquire about $200 million worth of art by masters like Jasper Johns, Roy Lichtenstein, Andy Warhol, Ellsworth Kelly, Barnett Newman and Jackson Pollock.

Mr. Lauder’s American Contemporary Art Foundation was responsible for the largest single group of art in that gift, including major works by Mark Rothko, Franz Kline, Warhol and Pollock.

This is a brilliant move to save a Breuer Building in a time frame where Breuer buildings seem a bit less loved than they used to be.

This is the solution when the US Ambassador to The Netherlands will leave his Marcel Breuer designed American Embassy in The Hague City Center after pressure from the The Hague Municipality because of the cumbersome safety measures put into place after 9/11:

Create a Whitney satellite in The Hague…. 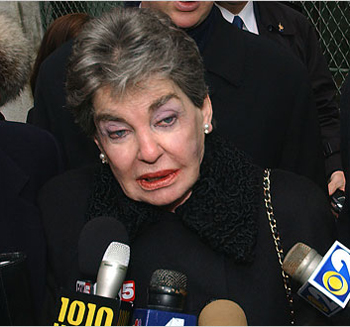 Leona Helmsley in 2001
Photo thanks to NYTimes

The Helmsleys owned inter alia the Helmsley Collection of hotels

It is fascinating to read some her obituaries and related stories:

The NY Times obituary devotes a lot of space to the tax frauds she was involved with:
Avoiding NYC sales tax on jewelry she bought from famous Van Cleef and Arples jewelers in NYC. Because she cooperated with the prosecution, only the “poor” Van Cleef & Arples employees were convicted after pleading guilty.

In 1987 a series of adverse articles in The New York Post about the Helmsleys, set off by one of their disgruntled contractors, led to a broad investigation. The following year Harry and Leona Helmsley were indicted by federal and state authorities on charges that they had evaded more than $4 million in income taxes by fraudulently claiming as business expenses luxuries they purchased for Dunnellen Hall in Greenwich, Conn, a 28-room Jacobean mansion on 26 acres with a sweeping view of Long Island Sound that they bought in 1983. The house was the setting for a 1968 movie, â€œA Lovely Way to Die,â€ starring Kirk Douglas.

In 235 counts in state and federal indictments brought by Robert Abrams, then the New York State attorney general, and Rudolph W. Giuliani, then the United States attorney and later mayor of New York and present Republican candidate for president, the Helmsleys were accused of draining their hotel and real estate empire to provide themselves with such extravagances at Dunnellen Hall as a $1 million marble dance floor above a swimming pool, a $45,000 silver clock, a $210,000 mahogany card table, a $130,000 stereo system, and $500,000 worth of jade art objects.

Nothing was too small or personal to be billed to their businesses, from Mrs. Helmsleyâ€™s bras to a white lace and pink satin dress and jacket and a white chiffon skirt â€” the dress and skirt were entered in the Park Lane Hotel records as uniforms for the staff. Mrs. Helmsley was also charged with defrauding Helmsley stockholders by receiving $83,333 a month in secret consulting fees.

The then 80-year-old Mr. Helmsley, suffering mental deficiencies, was found mentally unfit to stand trial. Leona Helmsley was tried in a case that was avidly followed by the public. A series of prosecution witnesses described a spiteful, extravagant, foul-mouthed woman who terrified her underlings and who could coldly fire an employee while being fitted for a dress. In the most celebrated line of testimony, a former Helmsley housekeeper testified that Mrs. Helmsley had once told her, â€œOnly the little people pay taxes.â€

It seems to the venerable NY Times is behaving a bit like a tabloid itself.

I also fail to see what is wrong with Leona’s statement “Only the little people pay taxes” which isn’t a pun, but a well known truth, as basically the rich are able to pay their advisers well and by doing so are able to save a lot of tax which the poor cannot afford to save paying. A Dutch assistant professor at Leiden University once even published a well sold book under the title “Paying tax is for dummies”. 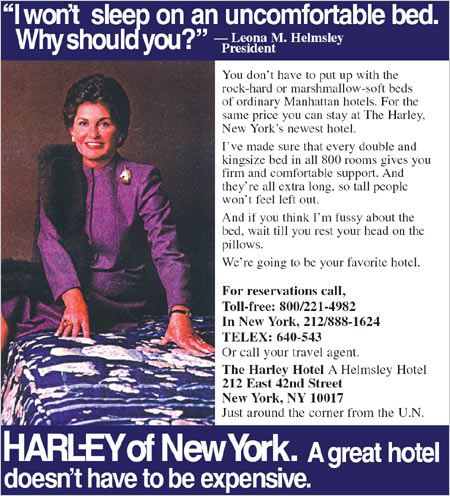 Picture thanks to NY Times

Leona Helmsley made herself into a household name by starring in advertisements for the hotels she owned together with her husband, in which she grandly proclaimed herself “the queen.” It was a phrase that bit back after she became embroiled in a well-publicized tax scandal, as the New York tabloids dubbed her “the queen of mean.”

Personally I like the concise obituary of the UK Independant

More interesting stories and books about her mentioned in Criminal Library

In the City Room Blog post of the NY Times there is more. I would like to highlight these comments from former employees among the venom in the comments:

All in all it is a pity she didn’t blog herself. She must have been a real interesting character.

Today in the news that her dog supposedly inherits us $ 10 MILJON! Who is going to walk the dog?

Usually reading through my Google News Reader I get tons of inspiration for this Blog and I don’t have the time to convert all inspiration into actual posts here.

From time to time I click and share in my reader and so I sort of built a second Blog, gje’s shared items, of items I like to address and sometimes really do address, but usually don’t. Until now I haven’t found a better way of sharing the news from the travel and luxury Blog community. In a window in the right column you see the newest items I have shared.

So in my Google News Reader i found this post Pedaling, the Bike-Sharing Project of Archinect. It caught my eye as I noticed recently there is a nice Bike Sharing running in Vienna under the name City Bike Wien.

For us Dutchmen this bike sharing is a very old idea. In 1965 Dutch Provo launched the White Bike Plan. Here is a nice write up about the anti establishment movement Provo. It also explains a bit of the origins of the Dutch coffeeshop culture. Her is another Write up that explains how the 2 White Bike (sharing) plans that actually were launched in Amsterdam didn’t work out. However there is a White Bikes plan running uninterruptedly since 1975 at the Dutch National Park De Hoge Veluwe.

After re reading this post, I decided I need to flesh this post out much more, albeit that the time constraints will make it appear in a bit random order: