The Needle by Calatrava, or as he says: “The Obelisk” is located at Plaza de Castilla, in the north of Madrid, next to the “Puerta de Europa” towers and the new CT Business Area. It is a present by the Caja bank to the city of Madrid at the occasion of its 300th anniversary.

A large movable sculpture formed by a central tube of steel covered by a skin of 462 bronze bars that can be moved by means of a hydraulic system. The central tube rests on an auxiliary steel structure that spans over the different tunnels and galleries located beneath the square. The foundation elements are three concrete piles with a diameter of 1m.

On both side of the obelisk you can see the twin leaning towers of Puerta de Europa (114 m, designed by Philip Johnson), behind it the Torre Caja Madrid (250 m, designed by Lord Norman Foster) and partly two other skyscrapers (Torre Sacyr Vallehermoso and Torre Espacio, both 236 m) 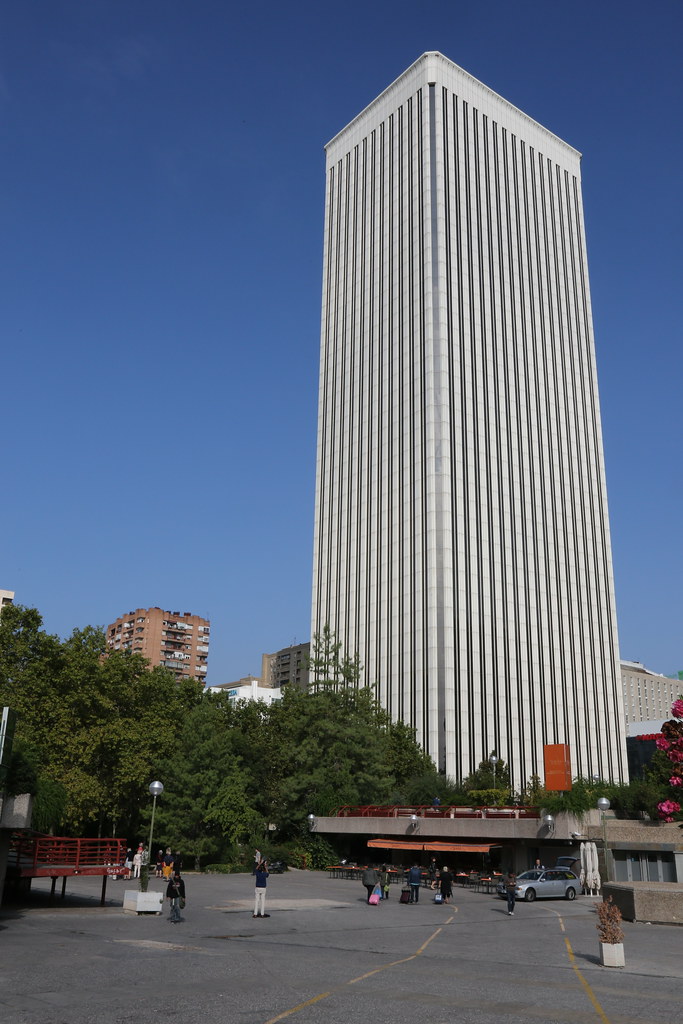 Was designed by Minoru Yamasaki who also designed the NYC Twin Towers. There are certainly similarities. Found this street artist in Madrid during a recent visit. Happy Halloween to all Recently I was in Madrid. I visited the CaixaForum Museum of modern art: An old power station renovated by the Swiss architects Herzog and De Meuron in 200-2001, shortly after they renovated the Tate London, also a decommissioned power station.

I could crop a selfie from the first photo.

What’s a bit annoying is that the CaixaForum Madrid doesn’t have its own web presence. It is part of the big Caixa Foundation. Caixa is a large Spanish bank. You can find a bit on the Foundations Website, but it’s not much.

This is what the architects say about the impressive buuilding:

A spectacular transformation
The only material of the old power station that we could use was the classified brick shell. In order to conceive and insert the new architectural components of the CaixaForum, we began with a surgical operation, separating and removing the base and the parts of the building no longer needed. This opened a completely novel and spectacular perspective that simultaneously solved a number of problems posed by the site. The removal of the base of the building left a covered plaza under the brick shell, which now appears to float above the street level. This sheltered space under the CaixaForum offers shade to visitors who want to spend time or meet outside, and at the same time, it is the entrance to the Forum itself. Problems such as the narrowness of the surrounding streets, the placement of the main entrance, and the architectural identity of this contemporary art institution are addressed and solved in a single urban and sculptural gesture.