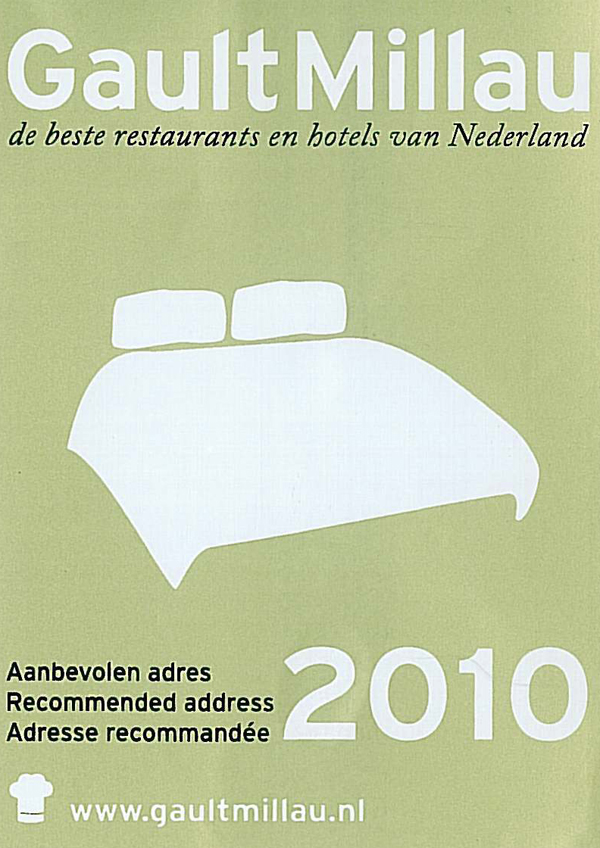 Yesterday, as the first of the 5 or 6 prestigious restaurant guides in The Netherlands, the Dutch version of the Gault Millau Guide presented its 2010 awards and 2010 guide with the best 500 and something Restaurants and best 220 Hotels of The Netherlands here around the corner in The Hague. I’m a bit sad I had to miss the ceremony…so near by.

Today I received the sticker proving the Gault Millau editors deem Haagsche Suites worthy to belong to the best 220 Dutch Hotels in their guide. Thank you Gault Millau for the quick service, that even beats the new listings on your own website 🙂

Gault Millau started in France as a restaurant guide in 1969. It was founded by two restaurant critics, Henri Gault (1929-2000) and Christian Millau. The French site is a mere window for their paper guide.

Yesterday the Belgian and Luxemburg Branche of Gault Millau also presented its 2010 Guide and awards.

I grabbed the following from the Misset Horeca Site:

Plaese note the best restaurant has been awarded 20 points out of 20 which is remarkable in the Gault Millau history. At the same time our Belgian neighbors awarded a Dutchman, Roger van Damme the Chef of the year award for his Antwerp based lunches only restaurant.

Two of those top restaurants, Parkheuvel and De Zwetheul are easy to reach for a dinner when staying in Haagsche Suites.

Two other Restaurants Calla’s and Seinpost who also earned good points are even nearer to Haagsche Suites. Seinpost has the best wine food combining sommelier of 2010.

Austria, Italy, Germany and Switzerland each have their own Gault Millau guides.The US and the UK have their Gayot guides. Gayot was a friend of Gault and Millau and they published joint guides until a schism in 2000.

Gault Millau is said to be the guide of the food purists more than the Guide Michelin….