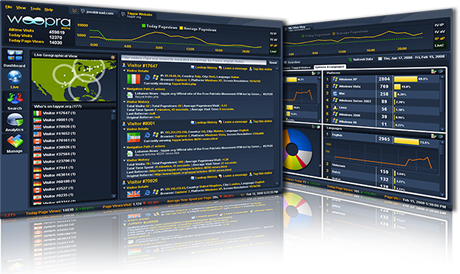 It was Lorelle VanFossen (from her Family name I guess she or her hubby has Dutch ancestry), avid WordPress advocate, who drew my attention to Woopra with her post Whooping Woopra Blog Statistics Program, starting as follows:

I’m rarely totally and completely blown away by anything, and yesterday at Dallas WordCamp, John Pozadzides of One Man’s Blog, who works together on this project with Elie El Khoury [italics added by HH], who blew the whole crowd away with his new blog statistics program, Woopra.

I now fully concur with Lorella’s observation. I am not such a stats lover that I write for my stats. I blog because I find blogging a reasonable orderly way of cataloging my work / life / interests / finds for myself and sharing them with my readers. I use my stats mainly out of curiosity, because it shows me how people land on my site and what they are interested in. It always gives me (too) many ideas what to write about.

Still a Private Beta
It was launched recently. Is still in private Beta. It is a small 4 man operation. You can sign in on their site. Then it takes quite some time before they let you in, because the demo at Dallas WordCamp drew so much attention that they can’t handle all requests in a timely way.

My short experience
I signed up shortly after Lorella’s post dated March 30, 2008. My patience was honored and I was let in on April 27.

I am in the process of installing several new workstations and a new server. Especially for Woopra I now have installed a second screen that constantly features Woopra. It is fascinating to see readers check in real life. You can see where they landed from, which search terms they used, where they land and which posts or pages or categories they read. It is almost too addictive and together with Twitter makes me forget Face book entirely.

Woopra has a built in chat functionality. I have tried it out with some of my readers and it works. I presume it scares the hell out of a reader when he gets a pop up screen out of nowhere and there are some concerns about the safety of the chat function. I take it that has to be ironed out yet. Also they have a plug in for WordPress that I haven’t even downloaded yet. You can tag your readers, so you can really start communicating with them if you wish via the Chat box. Twitter or mail.

For me the biggest surprise is that Woopra shows me that from all my posts here the two posts that draw the most readers are almost totally unrelated with my main subjects.

I suggest you check it out!

If you want to see other peoples raves on Twitter, just check out Tweet Scan on Woopra. A link I found through a visitor just a few minutes ago.