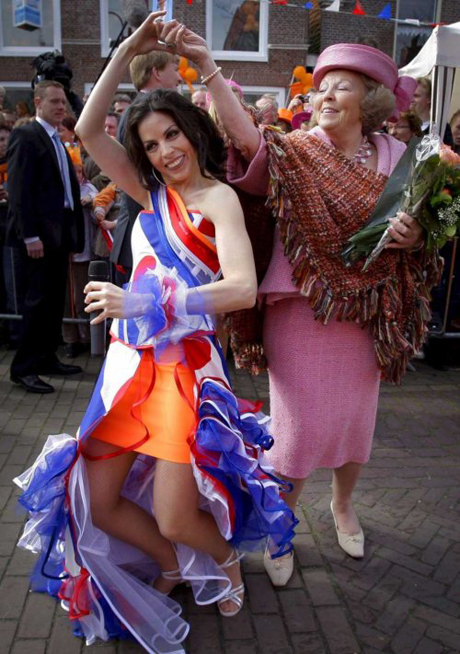 The Dutch Do Dance! Even their Queen!

Happy Queen’s Day!
On January 30, 2008 our Queen Beatrix reached the venerable age of 70. The Dutch QueenÂ´s birthday is celebrated officially on April 30th, since Queen Beatrix ascended the Throne. It is a public holiday and everybody goes out partying. In Amsterdam you can walk over the heads of the visitors. Many cruise the Amsterdam canals in little boats totally clad in Orange. Other people use QueenÂ´s Day as their annual garage sale day, because everybody is allowed to sell everything freely all over the cities. So did my family.

Under Queen JulianaÂ´s (BeatrixÂ´mom’s) reign there was an official defile at her palace which went on for hours and hours. Beatrix changed tis rather boring tradition satisfactorily and decided to pay two Dutch cities a visit in celebration each year. Today the Frisian cities Makkum, world famous because of their polychrome “Delf” blue ware, and Franeker had their turn.

She does that with the whole Royal Family. This often leads to humorous situations as the young Dutch princes are always in for a little playful game. Today you could see some princes trying to collect rings from poles while riding on a small tricycle.

The Queen herself made a few dancing steps with a Frisian Salsa dancer in Makkum. I was glad I found this nice photo to prove my right in my previous post.

The Salsa dancer was clad in a dancing dress made of the pattern and colors of the Frisian Flag over an orange dress. The Frisians have their own flag and own language and are very proud of it.

I found this excellent photo on Flickr where it appeared to have been uploaded by Ethiopian Eyasus Solomon. Thanks Eyasus.

The Dutch can now put their orange clothes in the cupboard until the European Football Championships.