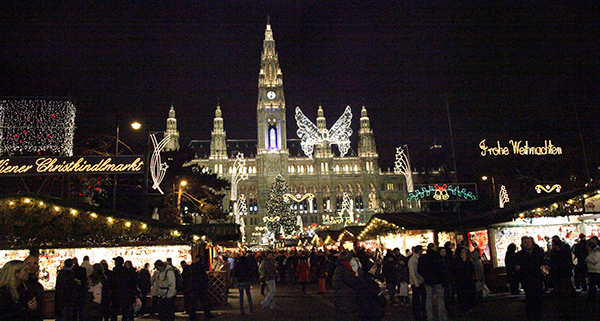 1 General
Over 40 years I visit Vienna almost annually. Hence I may have visited it over 40 times already. I may be biased, but for me Vienna is the number 1 city destination, especially around Christmas. It has a lot of Old World charm and elegance.
When I checked my Vienna category here, I noticed I had only one post labeled correctly with Vienna, while I have mentioned it in over 30 posts.
So it’s about time to cure the huge omission of not having written about Vienna in detail with tips and so. As one of my travel blogging friends will heading there I’ll rather do it now than later, to be able to help her a bit. Because I have so much material, it certainly will take several posts.
As Vienna has one of the best tourist sites at Wien.info, you should always check it out before you visit Vienna. You can even link through very easily to order theater tickets online or make restaurant reservations via its Search and Book widget at the right.
It may also be an idea to look for free audio/video tours at Itunes. I found this one, but haven’t checked it out yet. 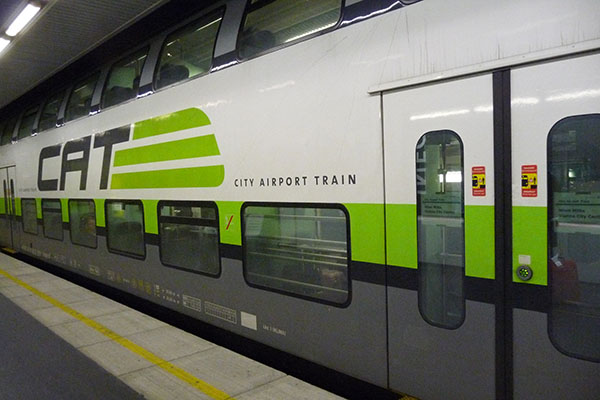 2 Getting There
Traveling by air you’ll most likely arrive at Vienna’s Airport which is located south of the Danube river between the little town Schwechat and the village Fischamend and only approximately 15 miles due east from the city.
From there the best connection with the city center is the City Airport Train (CAT) follow the signs. Traveling with the Cat you’ll end up in the city center and if your hotel is in the city center (roughly in the neighborhood of the Ring), it is somehow easy to reach walking from the CAT city terminal. It is also good to know that you can check your luggage in there for your return flight. Especially handy when you have a late flight back and want to do a bit of last minute shopping. You can check your luggage in in the morning and don’t have to return to your hotel. Before you get on board of the CAT it is maybe handy to buy a public transport pass for several days. 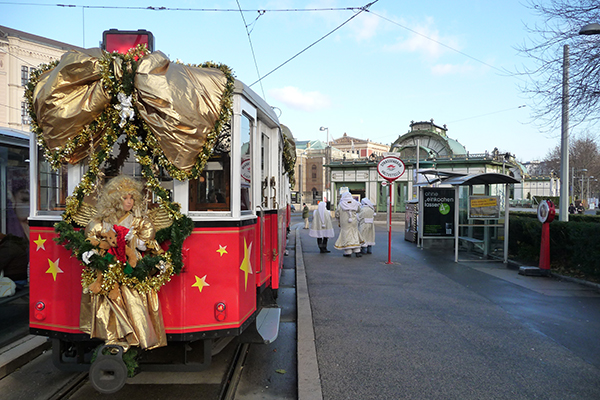 Even the trams have Christmas decorations in Vienna

3 Public Transport
Vienna has a tightly knit net of bus and tram lines. As it spreads across the city like a spiderweb, it is not always easy to find the right connections.
Vienna is one of the last cities that has realized a small metro network which means it is fast and efficient. When I’m not using my car I use the metro, or U Bahn in German. 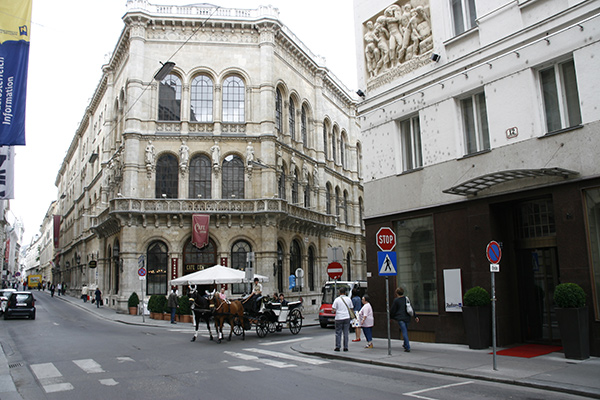 Left Café Central, Fiakr in the middle and the entrance of the Style Hotel in Vienna right

4 Hotels
Austrian Hotels are usually very good and Vienna has many good and also more affordable hotels, but my favorite hotel is the Radisson Sas Style hotel. It is right in the center, two steps away from the “Goldene Meile” (the Golden Mile) shopping area of the Kohlmarkt and from the Graben. It is close to the Royal Palace and various theaters and museums. It is opposite Café Central where you can have a better breakfast for less than that in the Hotel. When you are on a shopping spree, you can drop your finds underway while shopping. It is not too big with 75 rooms and the personnel is very friendly. I find it really nice to hear the “clippediclack” of the horse hoofs and their echoes through the streets early in the morning, because one of Vienna’s great tourist attractions, the Viennese Fiakrs or horse carts that do the tourist routes from the Stephans Dom, always come along this hotel on their tours. 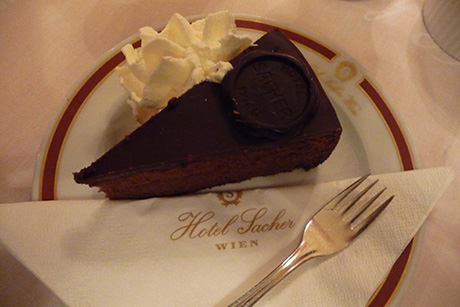 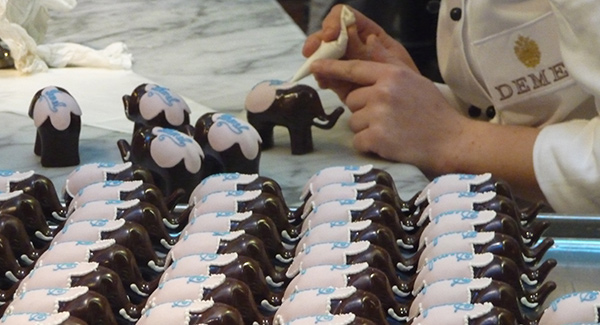 5 Coffee, Coffee, Coffee and Cake!
Vienna is all about Coffee and Cake. They practically invented the Café and have maintained the old Café traditions throughout. A Konditorei is more of a cake selling shop or pastry shop where they serve coffee and tea and lunch as well. Usually the Konditoreis are less relaxed than the cafés, but usually they offer better quality (the ultimate quality) cakes.
Some of my favorites are:

8 thoughts on “5 Tips for Visiting Vienna in Luxury”