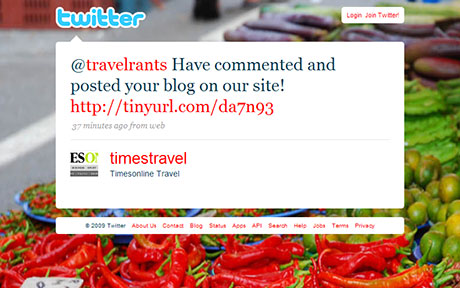 When you look at Darren’s post you see a lot of debate by the sheer number of comments.

Now what made Times Online post this and gladly announcing it on twitter? I have the suspicion that they thought “Hey, nice debate!”, let’s get a piece of the cake and replicate it on our site.

If I would be Darren, I wouldn’t be glad with the post. By it’s sheer volume Times Online undoubtedly will draw away part of the discussion from Darren’s site.

Moreover the Times Travel post is nothing more than one huge quote without adding any thought of their own. So I tweeted that there could be a copyright issue here.

One of my followers already commented “Bad Case of Lazy Web”

Another one commented “Darren should be glad with this media attention”.

What would you say?

P.S.: Oh and yes my thought on the question: Travel agents should be allowed to familiarize themselves with destinations, despite the economic downturn and the lay offs. It is simply part of their work.

Update after 8 comments
It turned out that Darren had asked Times Online to help out and they courteously did so by directing the answers and comments to Darren’s blog: Click their final link, which isn’t very obvious. My assumption was incorrect, at least in this instance. Sigh: It is hard to keep up with Twitter as a blogger:-)

11 thoughts on “Travel agents and Their Perks – Old Media vs New Media?”