When Pam Mandel answered my 10 Questions For: Pam Mandel of Nerd’s Eye Views, she mentioned a Fachertorte as one of her most favorite pieces of pastry. Initially I believed she’d made a mistake and accidentally had changed “Sachertorte” into “Fachertorte”. I thought only an American lady could make such mistake, because I as a Vienna Veteran for over 40 years would know of a Fachertorte (actually a Fächertorte) and had never heard of it. I had even posted a photo made by a German lady that I’d found on Flickr of a Sachertorte to go with Pam’s post. The lady in question didn’t like it that I had pinched her photo without asking her on beforehand. She kindly gave me her opinion. So I removed her photo of the Sachertorte just in time before Pam could check the interview….Pam immediately saw my editorial liberty and informed me accordingly. After readjusting the text I would have liked to place a photo of a Fachertorte, but couldn’t find one….

Now I’m happy to be able to present you photos of both pieces of pastry and to clear my own confusion.

A photo of the original piece of Sachertorte that I enjoyed at the very temple of the Sachertorte, the Hotel Sacher in Vienna (I tasted it on the very table you see on the excellent video here). It is a chocolate cake. It stands apart from all Sachertorte copies, because the cake is not so sweet as the copies. The one apricot jam layer in the cake is very thin. In the copies the apricot jam layer is thicker and sweeter. In addition the original’s jam layer is just under the chocolate icing. Finally the original is quite dry and should be eaten with unsweetened whipped cream. 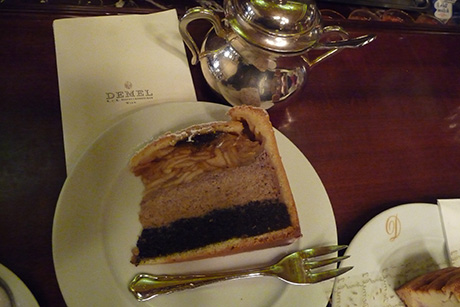 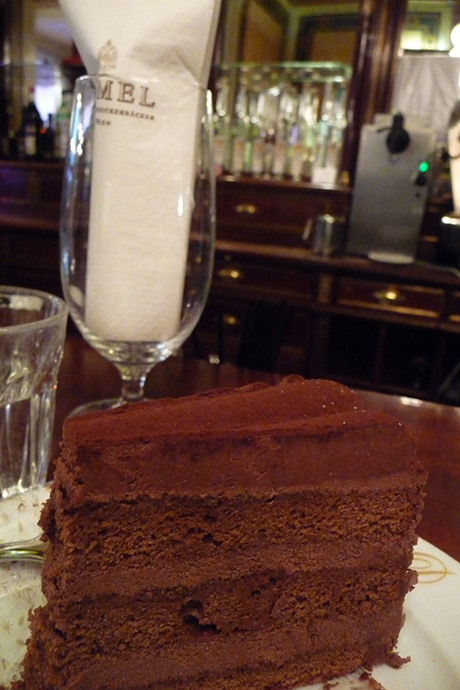 Yes I had a couple of nice days in Vienna. More to follow.