A Dutchman and a Belgian started Storytlr

Storytlr is not a startup, just a fun project that we are building during our free time. We are a two people team, based in Belgium & The Netherlands: eschnou is our PHP Wizard and alardw the CSS Ninja.

A few months ago we saw this video from Loic Lemeur who was asking about a way to help him build ‘the centralized me’. We liked the idea because it sounded like reinventing the good old ‘personal page’, realizing that a blog can only capture one angle of what we did online. More over, we felt that this page had to be personal, and not yet another profile page locked in a social network, and plastered with company branding. Storytlr brings you just that, a platform to build the centralized you, and it is really about you, not about us.

Loic also gave us another idea in this post, where he explains that he ‘lost’ all his youtube videos ! We felt the same when we realized that our Twitter archives were not available due to Twitter downtimes. This brought us to the conclusion that we needed to ‘own’ our data. We needed a way to easily archive our online data and even back it up. In Storytlr, you own your data, you can download all of it whenever you want. Of course, it would be even be better if Storytlr was an open source platform so all this data is where you want it to be. This is also part of the plans.

Finally we realized that our flow of Twitter messages, Flickr photos, Qik videos were in fact telling a story, the story of our daily lives, and that sometimes we wanted to repackage this story in a nice format (beyond a photo album) to share it with friends. So we decided to make it really easy to mashup all these activities into a compelling story that is easy to share. 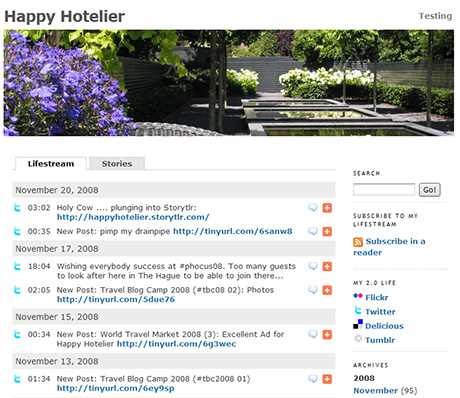 I’m off testing it at Happy Hotelier|Storytlr

They are getting kudos by Mashable.

Update
Unfortunately they ceased their service as of February 28, 2010
Now it is a Apache licensed open source project.