Huis ter Duin in Noorwijk changed into a fort

Today and tomorrow 27 ministers of defense meet “informally” in Noorwijk, just a couple of miles North East from The Hague.

According to the Nato site they will

discuss the way ahead for NATOâ€™s operations and Alliance transformation.

The ministers will discuss ways to ensure that the NATO-led operations in Afghanistan and Kosovo remain correctly configured and properly resourced.They will also consider NATOâ€™s role in Afghanistan as part of the wider efforts of the international community to support the development of national security, governance and development in Afghanistan.

They will also address the continued transformation of NATOâ€™s defense capabilities and how best to continue ensuring the availability of forces and capabilities for the Allianceâ€™s operations and for the NATO Response Force.

In the informal meeting of the NATO-Russia Council, the 27 Ministers will address civil and military activities, as well as cooperation in Afghanistan and in the framework of NATOâ€™s counter terrorism operation in the Mediterranean, Active Endeavor. 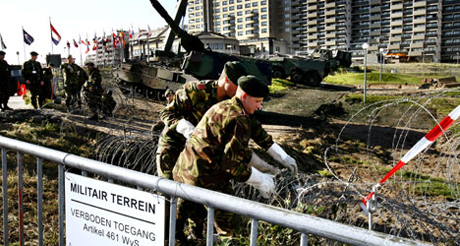 In order to make the meeting as secure as possible luxurious Grand Hotel Huis ter Duin has been fenced off from the outside world and looks like a military fort. Its premises and the complete town of Noordwijk have been declared temporary military zone. Without due form of process anybody can be searched and moved away from the area. A Dutch Marine minesweeper is anchored in front of the seashore located hotel and secures the seaside. Airplanes heading for Schiphol Amsterdam Airport have to make a detour as the area is declared a no flight zone as well and Noordwijk is just located in one of the frequently used approaches for the airport.

I am not sure the Huis ter Duin Hotelier is really very happy with this prestigious venue.