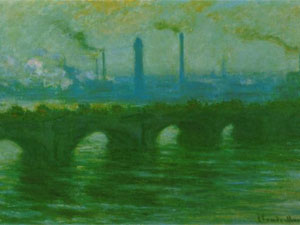 Monet painted his Waterloo Bridge paintings during a stay in the London Savoy Hotel. This painting fetched a record at Christie’s of UK pnd 18 mio which is more than double the pre sale estimate.

From the Lot notes of Christie’s :

‘I adore London, it is a mass, an ensemble, and it is so simple. What I like most of all in London is the fog. How could English painters of the nineteenth century have painted its houses brick by brick? Those fellows painted bricks that they didn’t see, that they couldn’t see… I so love London! But I only like it in the winter… It is the fog that gives it its marvellous breadth. Its regular, massive blocks become grandiose in this mysterious cloak’ (Monet, quoted in J. House, ‘Visions of the Thames’, pp. 15-37, Monet’s London: Artists’ Reflections on the Thames 1859-1914, exh.cat., St. Petersburg, FL, 2005, p. 33).

When Monet arrived in London in 1899 for a family visit, he had not been to the British capital for some time. Checking into the relatively recently built Savoy Hotel, on the North bank of the Thames, he was amazed by the view, fascinated by the ever-shifting light effects on the river, and immediately embarked upon one of his most celebrated series of paintings, all showing essentially one of three motifs in London. These were the Houses of Parliament and, painted from his bedroom, Charing Cross Bridge and Waterloo Bridge. He focused more on the latter, as in Waterloo Bridge, temps couvert, perhaps enjoying the looping rhythm of the arches in comparison to the rigidity of the ever-right-angled Charing Cross Bridge. Another aspect that may have led to his preference of Waterloo Bridge as a theme was the fact that the sun, rising in the East, shone during the morning from behind it, providing an intriguing array of subtle light effects, a smog-bound chiaroscuro. It is a tribute to the visual power of Monet’s paintings of Waterloo Bridge that the majority are now in museum collections throughout the world, meaning that the appearance of Waterloo Bridge, temps couvert is a rarity, a factor that is emphasized by the sheer quality and beauty of this painting.

It was in order to see his son Michel, who was ostensibly in London to improve his English, that Monet arrived in 1899 with his wife Alice and his stepdaughter, Germaine HoschedÃ©. His immediate rapture on seeing the view from his room must have been to the chagrin of his family, for already during this stay he embarked upon the beginning of a campaign that would last half a decade. Canvas after canvas was used in order to capture the ever-changing view from his window, and the speed with which these view changed meant that he ended the first stay frustrated, and would return– alone, and therefore presumably without the distractions of his family– to the same hotel in 1900 and 1901.