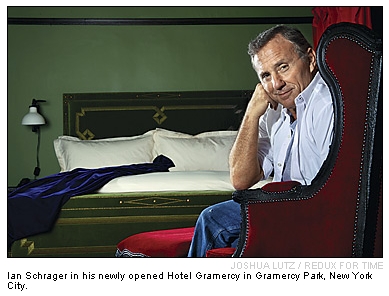 I am not sure whether now 60 years young New Yorker Ian Schrager is into yachts and yachting, but I do know for sure that Philippe Starck is (as is the other famous hotel creator Anouska Hempel, or Lady Weinberg). Ian has created a couple of hotels together with Philippe Starck. Hence the title.

In any case Schrager is a man of theater and renewing concepts and slogans.

In the seventies and eighties he creates renowned nightclubs, studio 54 and Palladium, where the rich and famous repose themselves. There the DJ phenomenon is born.

Then he changes tack and starts in hotels:

I think Morgans was the first “Boutique” hotel.

Then, together with Philippe Starck,:

In the middle of 2005 Schrager resigns a as CEO of Morgans Hotel Group, but remains tied with is as a consultant with a lucrative consulting contract (use of a luxurious private jet, a luxurious car, a luxurious secretary and free stays at the (then) 9 hotels of the group) and as a shareholder(?). The group comes in a financial dip due to 9/11 and the fact that mega hotel consortia start fighting themselves into the market for the hip and famous guests. Up to and including 2005 Morgans Hotel Group reports heavy loses. The first six-month period of 2006 after a financial reorganization with an IPO the results improve. The involvement of Schrager after the financial reorganization is not entirely clear.

However, recently, through his new Ian Schrager Company, and again on a new tack, Ian Schrager avails of one of the newest design hotels which recently was opened in New York city: Gramercy Park Hotel. 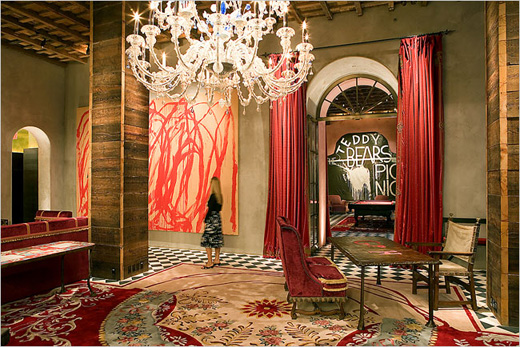 Now not the tight chic and sometimes contrary of Philippe Starck, but the “Anti Cool”, “Bohemian Eclectic” of Julian Schnabel, painter, sculptor, film director and musician. According to Schrager it became time for something else then the many times copied and now obsolete “Boutique Hotel”, “home Away From home”, “hip” etc.. Well, if you look well to the copper nails of the chair he is seated on, the style has something of Garcia’s Costes, L’Hotel and LeMeridien Des Indes….the style en vogue between roughly 1850 and 1890….a style which, here in the Netherlands, we simply call “Eclectic”…..

Moreover he now is heavily involved in developing very luxuriously apartments. One project is being developped next to the Gramercy park hotel. The owners of the very luxurious and expensive apartments can, if they want, use the hotel facilities. A phenomenon that we see also at other larger hotels.

When I listened to the his voice in an interview about his condo developments, I inadvertently have to think of The Godfather…

Funny to see Ian undergo the reverse development, from nightclub owner to hotelier to property tycoon, when it is usually the other way around: a property tycoon getting involved in the hotel business.