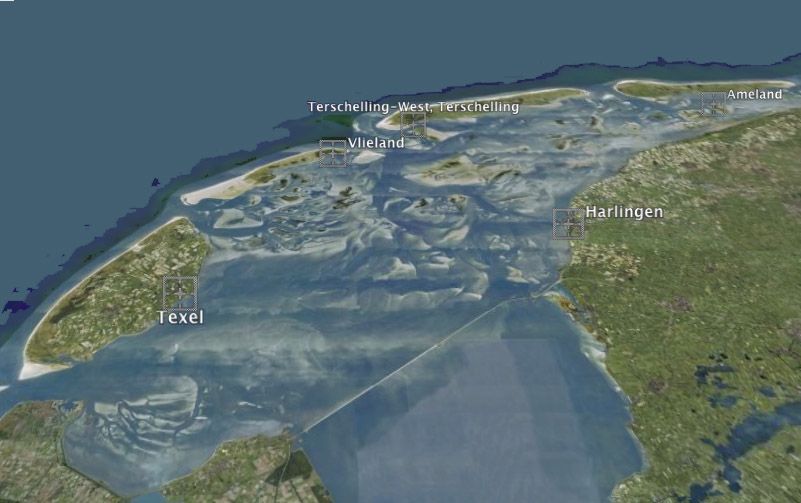 This photo shows a large part of the Dutch Waddenzee (Wadden Sea): a large shallow water areal between a couple of islands in the Norh, the provinces North Holland below left, Friesland to the right and Groningen which is not shown on this photo. Right of Groningen it spans further across to Denmark above between the German North Sea Coast and German’s Wadden Islands. You can see the large dike (Afsluitdijk) connecting the two provinces. The Dutch word wad means a shoal that becomes dry at ebb tide. There are many of them and during ebb you can walk from several places on the mainland to several island. It is a real adventure and can be dangerous if not well planned time wise.

The Wadden Sea (Germany / The Netherlands) comprises the Dutch Wadden Sea Conservation Area and the German Wadden Sea National Parks of Lower Saxony and Schleswig-Holstein. It is a large temperate, relatively flat coastal wetland environment, formed by the intricate interactions between physical and biological factors that have given rise to a multitude of transitional habitats with tidal channels, sandy shoals, sea-grass meadows, mussel beds, sandbars, mudflats, salt marshes, estuaries, beaches and dunes. The inscribed site represents over 66% of the whole Wadden Sea and is home to numerous plant and animal species, including marine mammals such as the harbour seal, grey seal and harbour porpoise. It is also a breeding and wintering area for up to 12 millions birds per annum and it supports more than 10 percent of 29 species. The site is one of the last remaining natural, large-scale, intertidal ecosystems where natural processes continue to function largely undisturbed.