Recently, on recommendation of a friend, we stayed three nights in the Motel One Munich City Ost. It is important to mention the “City Ost” part in its name, as currently Munich has three and soon will have four Motel Ones. Currently, in Germany there are already 21 Motel Ones and they are expanding rapidly.

Why do I believe it is the Ultimate Pod Hotel?

Recently I reviewed the CitizenM Amsterdam Schiphol, the first of a chain te be rolled out, and I was really impressed by its philosophy and its design.
However, Motel One has four plus points when compared to CitizenM:

Motel One Locations
Are preferably inner-city locations or in peripheral areas of cities and then, with convenient access and visually prominent locations, next to motorways and surrounded by arterial routes and/or in busy locations such as commercial, industrial or mixed-use areas.
Motel One’s Lounge

Has designer chairs and a wide screen with a fake fish aquarium program that I hate and have seen in other places as well. At the back of the chairs you see one of the structural columns that have brick or stone strips as wall covering. They have a function as separation of several compartments of the ground floor. They give the whole a bit homey feeling.

Has a triple function as reception, bar and breakfast room, while the breakfast buffet is cleverly hidden when not in use by a folding separation. The people at our place were very friendly and check in is very simple: It is done by real life people and not by computer screens with the usually necessary assistance from people. Check out is very easy: At Motel One you are required to prepay for your whole stay, so at check out you don’t have to do anything else than return your key card. There are no mini bars and you are required to pay cash or by card when you order something from the bar which is open at least till one AM, but I presume you can get something during the whole night as the reception is staffed 24/7. 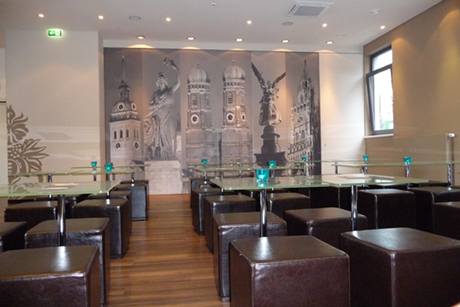 Here you see the seating area for the breakfast part of the lounge with the folding separation that covers the breakfast buffet area.
Granted The CitizenM lounge is flashier, but this lounge is also okay.

Motel One rooms
Are small, no question about that. Hence I’m coining it a Designer Pod hotel rather than a Motel. 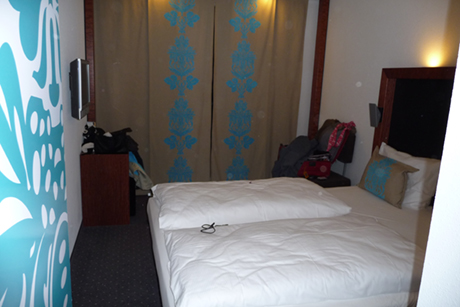 But as you can see they are cleverly dimensioned. You can move around. At your left side you see a small sort of cupboard where you can hang some clothes. 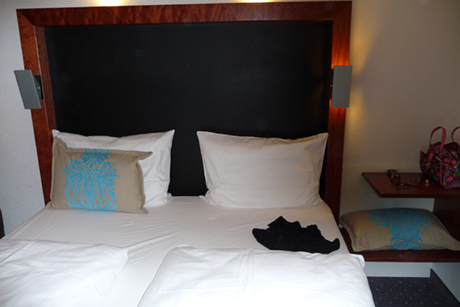 The bed, accessible from three sides, with clever easy to clean headboard and no footboard (I’m 6″4). good reading lights. 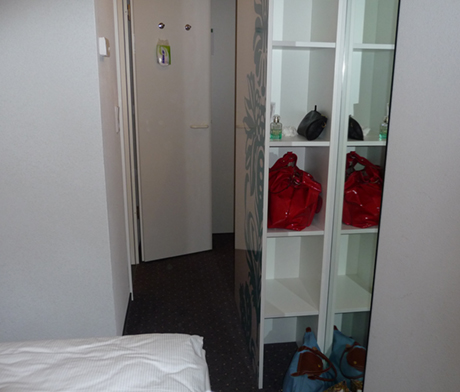 Photo taken in the direction of the bathroom and entrance. Here you see part of the open cupboard with places for stuff. 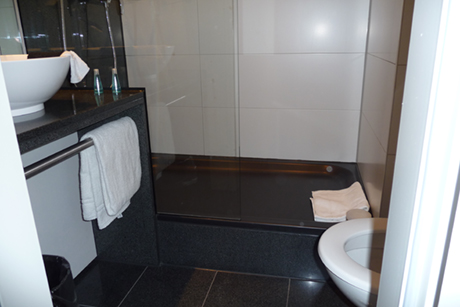 I have yet to find a pod hotel bathroom that has this good lay out and design. There is no bath, but a shower stall that measures 80 by 160 cm. I really like the huge horizontally placed white tiles. The floor of the shower stall is a simple Bette polyester showerfloor. Easy to clean and not slippery at all. It matches fine with the black tiles of the floor and the under side of the sink. You can easily reach for your towel from the shower. Waste basket under the sink where you anticipate it to be. The glass separation is partly glued to the side of the table holding the Philippe Starck designed sink. That gives it great strength. In addition the accessibility is good, even if you are a big fellow like me, and you don’t have to wrestle with a shower curtain while the Bette shower floor sees to it that the floor between the toilet and the sink is not inundated when you take a shower. This is an example of how a small bathroom can be. I really like it!

I have a few minor points of critique:

Total number of hotels: 21 Motel Ones in Germany (see : Motel One Site)

When I see “Motel” I have an association with seedy worn out US (or Dutch or German) side of the road accommodations too greasy to enter. Therefor I believe the name is ill chosen. I believe it is a pod hotel by the size and conciseness of its rooms, the 3 in 1 lounge, but from the pod hotels I have seen or been in, it is the most complete one.

If you want a bed to crash in, do go with rates from Euro 49 to Euro 89. I am already prebooking a room in a Berlin Motel One for the 2009 ITB Berlin Blogers meet up.