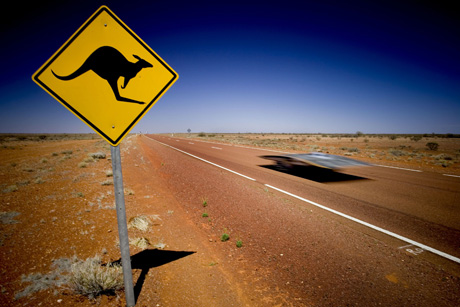 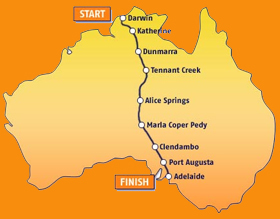 The Australian Panasonic World Solar Challenge is a bi annual 3000 km solar car race from Darwin to Adelaide in Australia since 1987, so this year it celebrates its 20ieth anniversary. The challenge is for student teams from universities and colleges to design and construct the fastest vehicle that is propelled on solar energy only and can endure the 3000 km distance. The 2007 challenge counts 45 entries from 21 countries. 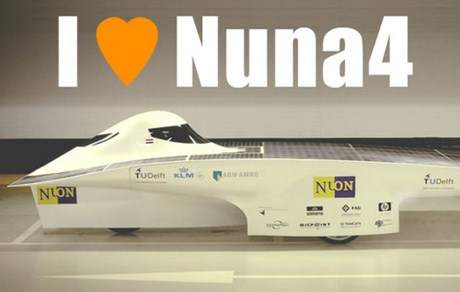 Along with other solar cars, Nuna4 will be competing under extreme weather conditions, having to navigate between other traffic on the road â€“ with the notorious and dangerous Australian road trains – as well as avoiding kangaroos and other obstacles. 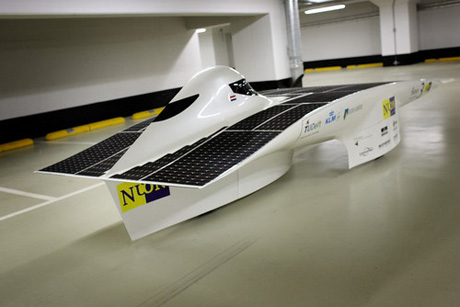 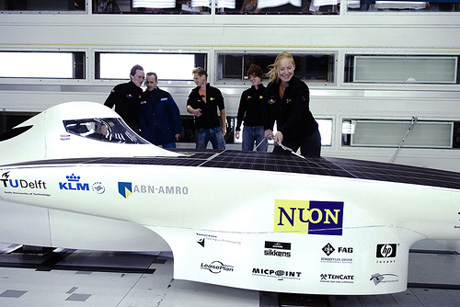 The team has successfully come through the wind tunnel testing sessions. Its top speed is reported to be over 140km/hr. It is a really professional operation!

Team Nuna4 consists of four Aerospace Engineering students: Susan Luijten, Hjalmar van Raemdonck, Oliver van der Meer and Demian de Ruijter. The Design Engineering Department is repreented by Joep Steenbeek, Tine Lavrysen and Ivo Hagemans. Mechanical engineer Rabih Alzaher and Electrical Engineering graduate Paul Beckers are also on board. Stefan Roest brings an unusual perspective to the project from his Shipbuilding studies and will be the team leader. The team members have either completed their Bachelor’s degree, or are about to do so in a short time.

Apparently Nuna4 is in the process of revamping its website. It is clear that the development of the car had their first priority.

I wish them lots of luck!

Here a photo and a video of the unveiling of one of its fiercest competitors, the Continuum of University of Michigan: 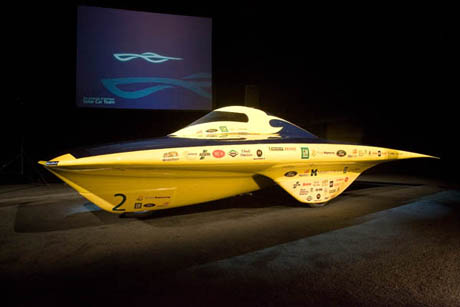 Usually reading through my Google News Reader I get tons of inspiration for this Blog and I don’t have the time to convert all inspiration into actual posts here.

From time to time I click and share in my reader and so I sort of built a second Blog, gje’s shared items, of items I like to address and sometimes really do address, but usually don’t. Until now I haven’t found a better way of sharing the news from the travel and luxury Blog community. In a window in the right column you see the newest items I have shared.

So in my Google News Reader i found this post Pedaling, the Bike-Sharing Project of Archinect. It caught my eye as I noticed recently there is a nice Bike Sharing running in Vienna under the name City Bike Wien.

For us Dutchmen this bike sharing is a very old idea. In 1965 Dutch Provo launched the White Bike Plan. Here is a nice write up about the anti establishment movement Provo. It also explains a bit of the origins of the Dutch coffeeshop culture. Her is another Write up that explains how the 2 White Bike (sharing) plans that actually were launched in Amsterdam didn’t work out. However there is a White Bikes plan running uninterruptedly since 1975 at the Dutch National Park De Hoge Veluwe.

After re reading this post, I decided I need to flesh this post out much more, albeit that the time constraints will make it appear in a bit random order:

Darren Cronian was the guy behind the Travel Rants Blog. Unfortunately he discontinued the blog later. Earlier I posted already about him.

I have a weak spot for him, because, in comments to a post about The Happy Hotelier he urged me to go on with this Blog and work hard on it, which I did since.

In a recent interview in Europe a la carte we learn a bit more about Darren:

His business is World Wide Holiday Homes. He developped this site into a business after his parents bought a holiday home in Spain which they wanted to rent. Ha ha, he obliged them by building a whole imperium of a website around the idea of setting up a site to rent the family property.

He was once asked to find a mud hut in Kenya as a vacation home and found it. This is not so strange and also not so difficult, as more than 2/3 of the world population lives in a mud house. Only we in the West usually are not aware of this fact. An important source for anything about adobe, earth, mud or straw bale building is this impressive Blog: Earth Architecture.

Actually I had collected already some links to mud hotels and vacation rentals in the past:

Out there there must be some more very luxurious earth lodges as well.

As sustainable or green holidays are becoming more and more an important factors in traveling, I believe earthen, clay, mud or adobe accommodations will get more and more attention and are worth while a consideration. Also in my own place I have experimented successfully with pigmented clay plastered walls that contain the central heating pipes.

Finally: a special way of spending your holiday is a working holiday where you learn how to build or decorate a home with earth/clay/mud.

Who has more sustainable accommodation suggestions?