Europol calls itself “The European Police Office”. Its is the European Union Law Enforcement Organization that handles criminal intelligence. Its mission is to assist the law enforcement authorities of Member States in their fight against serious forms of organized crime. It has its main office in The Hague in a building that used to be a college campus.

There are plans to move the main office to another location in The Hague,
because of the necessary(?) increase of the number of international employees due to the influx of many new member States into the European Union.

Marquette of New Europol office,
rendering thanks to the winning
Quist Wintermans Architects

The designated building plot for the new office is close to a residential area with a great monumental value.

Doesn’t look too bad. However, if I’m well informed that for security reasons the current plan is the same building, but 90 degrees rotated left which is far worse compared to this situating, because the residents in this Marquette situated in the lower left corner will only see the blind walls of the left building and of the highest building (The architect’s rendering cleverly don’t show the blind walls.)

Today the Municipal Committee that monitors the design of new buildings (and their impact in monumentally valuable environments) will have a public hearing, while about 300 near by residents have lodged protests against the building plans the massiveness of the buildings itself and the necessity of taking a lot of space for security measures. Just because of the heavy post 9/11 security measures around the USA Embassy, The Hague and the US ambassador recently agreed to move the Embassy outside the city center. This on its turn caused protests of the residents around the building plot for the new Embassy. Civil servants jargon for such protest is NIMBY: “No In My Back Yard!” 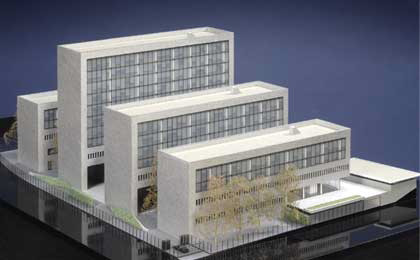 Even the former state architect and a couple of influential Dutch architects have written an open letter to the The Hague Municipal authorities to urge them not to take this spot, or at least not to build the building that is anticipated.

Another angle that the residents will not see!
Rendering thanks to the winning
Quist Wintermans Architects

At first glance Europol’s site doesn’t divulge a word about this plans except for this ancient press release. Probably, because they lack some corporate governance officers: See their job opportunities. Come on ladies and gentlemen, the salaries are -as usual with inter governmental organizations- on a very low tax base…. I find it strange, as in the past (well already about 20 years ago now) another intergovernmental organization, the European Patent Office with main seat in Munich, Germany and second important office in Rijswijk, a suburb of The Hague, attracted a lot of publicity with new building plans that eventually didn’t com through, because the number of European patent application all of a sudden decreased enormously.

Well we will see what the wise man will decide. Maybe they will rotate it back 90 degrees 🙂 “And they took a sip from their glass and left it as it was”